Israel’s ambassador to the United Nations, Ron Prosor, called on Wednesday to put an end to the incitement against Israel. 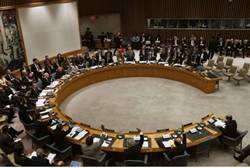 Speaking to the Security Council, Prosor said that incitement was still rampant across the Middle East, especially in the Palestinian Authority (PA) and Iran.

“Any country that does not work to stop the incitement now paves the way for the horrors to come,” he warned.

Prosor called on the Security Council to “wake up and take active steps against the Holocaust denial, the anti-Semitism and the racism which still rears their head throughout the Middle East.”

He added that an entire generation of Palestinian Arab children is being educated to believe that murdering Israelis is moral, that racism against Jews is justified and that terrorism is tolerated. Prosor quoted Iran’s supreme leader, Ayatollah Ali Khamenei, who has described Israel as a cancer and called for its destruction, with the crowd chanting “Death to America” and “Death to Israel”.

“He who does not attach importance to these calls, did not learn anything from history,” said Prosor.

Peace talks between Israel and the PA resumed last summer, but that has not stopped the PA from inciting against Israel in its media and in public speeches given by its officials. Many of these incidents have been reported by Arutz Sheva.

In one such incident, PA TV broadcast a crudely anti-Semitic programlegitimizing violence against Jews in Judea and Samaria – who were stereotyped as violent thieves. The end of the program glorified the humiliation of a religious Jew by cutting off his peyote side-curls, in a scene chillingly reminiscent of Nazi anti-Jewish propaganda.

Other broadcasts included a re-run of a music video encouraging violence against Israelis, and the glorification of the murderer of 61 Israeli civilians on the official Facebook page of PA Chairman Mahmoud Abbas’s Fatah party.

The Israeli Cabinet was recently presented with a detailed report on the incitement and the culture of hatred in the PA.

The findings presented to the ministers show that incitement against Israel and the Jewish people is continuing on official media channels including – inter alia – by bodies that are very close to the PA Chairman and in educational and religious networks.