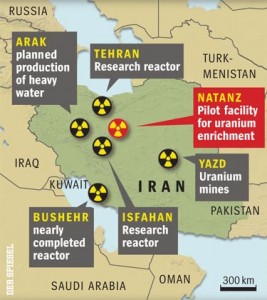 Iran–and against bipartisan sanctions legislation that enjoys majority support in both houses of Congress. The president’s “best case,” however, stretched the truth significantly, and in one respect was a plain lie: Iran has not “begun to eliminate its stockpile of higher levels of enriched uranium.”

Under the six-month deal–the full text of which has not yet been made available, but whose details were released in general form–Iran will convert its existing highly-enriched uranium to an unusable form. What that means is that it will oxidize the highly-enriched uranium–a reversible process. None of that material will be destroyed or exported outside the country. Nothing, in short, is being “eliminated”–but preserved.

While promising to veto any new sanctions legislation, Obama vowed: “If Iran’s leaders do not seize this opportunity, then I will be the first to call for more sanctions.” That is not a lie in the strict sense, but there is no one on Capitol Hill who believes that, on either side of the aisle. Since the beginning of his presidency, Obama has resisted new sanctions. To stop new ones, he has evidently decided it is worth lying to Congress.

by Steven J. Rosen and Daniel Pipes The Jerusalem Post July 10, 2012 Critics of the United Nations Relief and...