Detroit, once a booming metropolis with a strong economy and strong society, declared bankruptcy last July. After 50 years of electing Democratic mayors, the city now has a state-appointed emergency manager overseeing its financial operations. 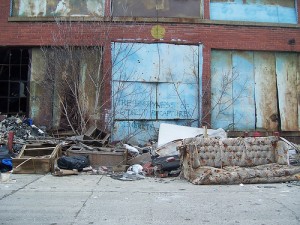 What happened to this once-great American city?

Detroit’s problems stem from years of failed liberal policies, Heritage Foundation President Jim DeMint noted last year: “Their population has decreased by more than half in the last 50 years. Only 7 percent of eighth graders read at grade level. Unemployment for Hispanics and African Americans is near 40 percent. Gangs and violence are rampant. There are over 400 liquor stores in Detroit, but not one chain supermarket. Detroit is a showcase for the liberal agenda.”

A new documentary premiering tonight, “Bankrupt: How Cronyism and Corruption Took Down Detroit,” examines the reasons for the city’s downfall. The Foundry interviewed Ben Howe, the film’s director and executive producer.

Why did you decide to make a documentary about Detroit?

I’ve been interested in the situation in Detroit probably since around the end of 2008 when President Bush announced the first round of auto bailouts. At the time, I was running a couple of different companies, each trying to get their feet off the ground but suffering under the pressure of the recession. It really just blew my mind that while I was working to keep things afloat by sacrificing, these mutli-billion dollar companies were being told that they never have to worry about failing. It was an upsetting realization that the politically connected were given this luxury while millions of others across the country had to deal with reality. Once President Obama continued those bailouts and I started seeing people saying they “saved Detroit,” I began writing and making short videos about the auto industry. I’d felt they were lying to America. Once the city of Detroit announced it was filing for bankruptcy, I knew the time had come to say more than I had before.

What’s the most surprising thing you learned in the course of your interviews?

Prior to these interviews, I’d known that Detroit was a successful city many decades ago. What I had not realized was that it was the most prosperous city in America. This makes its fall much more tragic in my mind. It’s clear that Detroit had everything it needed to stay on top of the world in terms of its economic dominance, but it let government and big business collude with powerful unions in a way that ultimately brought the city to its knees.

Heritage President Jim DeMint has called Detroit a “showcase” for the liberal agenda. Did liberal policies contribute to the current state of Detroit?

I think Detroit is the perfect example of what happens when the planners get a hold of keys to the city. They thought they knew best and partnered with huge corporations like GM and Chrysler, awarding them tax breaks and abusing eminent domain for favors — all in the name of creating jobs that rarely materialized. And all the while, the unions tightened their grip on the public and private sector with increasingly outrageous demands that ignored fiscal realities. As those checks became due, bailouts and increased taxes on the citizenry were the solution proposed by those same planners who caused the problem in the first place. To me, it is a textbook example of an over-involved government and crony capitalism disrupting the free market. One needs look no further than the 1.3 million citizens who have fled the city in the last few decades to see the effects of these policies.

You claim in the film that cronyism and corruption brought down Detroit. How did they contribute to the downfall?

Cronyism and corruption are central to the story of Detroit. Political favors and greased palms ruled the city and the result was an enriched few and an overtaxed, under-served citizenry. When these corporations and union management ran out of ways to mask the underlying structural issues of their companies and realized that Detroit was no longer in a position to help them, they went to the government with their hands out and the federal government happily obliged. And while they did this, Detroit was used as a political football and promised a recovery to avoid bankruptcy. So now, six years after the bailouts, Detroit still had to file but is worse off than it would have been had it just faced reality a decade ago.

You have criticized the quality of conservative filmmaking in the past. Did that influence your decision to produce your own documentary?

I wouldn’t say it influenced my desire to make films; I’ve always intended to make films. But I was conscious of how when I wrote my commentary about conservative films, that there would be an element of people telling me to “put my money where my mouth is” and throw my own work into the public square to be judged by the same merits that I judged others. I hope I don’t disappoint. My team and I have worked tirelessly to make what we believe is a solid film that tells an important story. The current plan is to release it on YouTube upon completion but it may end up on TV at some point as well.

Editor’s Note: Ben Howe regularly produces videos for The Heritage Foundation, including two of our most popular, “Obamacare: More Than a Glitch” and “The Benghazi Disinformation Campaign.”

In Case You Missed It:  STASI-FBI Scoured Through Melania Trump’s Wardrobe, Searched EVERY ROOM, Hours in His Private Office, Forced Trump Attorneys to Sit Outside in 91 Degree Heat
Posted in Financial, Freedoms and tagged Detroit, Foundry, Freedom, Governments, Obama.

By Ann Coulter As House Republicans prepare to sell out the country on immigration this week, Phyllis Schlafly has produced...