Much of the sexual harassment/assault/rape culture today is a result of the sexual liberation of women promoted by feminists and Democrats for decades now. In many cases women’s own behavior leads to their victimhood. How? Let’s look at the facts. 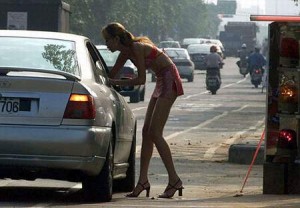 If an unmarried female with her feminist-granted right to unlimited sexual pleasure is sitting at a bar at midnight looking for a man to have intercourse with, she is said to be exercising her rights as a “modern woman”.

Yet she is infinitely more likely to be assaulted/raped than a woman who is married and who is at home asleep and living a moral life with her husband and children.

But such statistics matter not to the feminist elite. No, women should be able to do whatever they want. And if the outcome is bad then blame someone else. After all who could possibly be heartless enough to blame the poor victim?

Under the rubric of feminism millions of women are leaving themselves open to criminal assault by acting in ways that women did not act for millennia. Because they had common sense. They understood that they indeed were “the weaker sex”. Feminism has now convinced them otherwise, however.

Now certain women want to work and make money and have children without a husband or remain single and live a sexually active life. Yet what are the outcomes of these ways of living?

First, single women are statistically much more likely to be the victims of crime (and to be poor) than women who are married. That is because the man protects his wife. Yet the husband is called every name in the book by modern-day feminists who do everything to stigmatize marriage.

Here is just one telling story from October 31, 2011 from thedailynewsonline.com in New York state:

ALBION — An illegal alien from Honduras was charged with murder for the vicious stabbing death of a shopper in the Wal-Mart parking lot Sunday night… Luis A. Rodriguez-Flamenco… 24, is accused of repeatedly stabbing Kathleen I. Byham, 45. Byham was shopping alone and had just left the store when she was approached by three men as she got to her car about 7 p.m.

The most noteworthy fact in this story is the line that ‘Byham was shopping alone’. This is significant. (And by the way, who is ushering in more and more violent illegals to America? Answer: The Democrat left.)

Meanwhile the feminists and Democrats are encouraging every other type of behavior that is opening women up to every kind of crime including assault and rape. This happens primarily through the legitimization of single motherhood. But then there is the sexual frenzy on college campuses; the serial adultery and promiscuity portrayed as harmless in endless Follywood/TV treatments; the relentless ridicule and disparagement of Christian morality and restraint; and the media suppression of the real statistics about the epidemic of sexually-transmitted diseases now sweeping the nation.

And abortion? No problem. It only takes an hour.

Because everyone knows that the “liberated” females of today on the streets, in the schools and in the workplace often use provocative dress and taunting, goading language and actions to attract attention. Because there indeed is such a thing as “asking for trouble”. Then they act like victims when they are… victimized.

And of course any charge against a conservative is immediately taken with utmost seriousness while, again, Democrats get a pass on all sexual misbehaviors. Remember how the story about former vice presidential candidate John Edwards’ sexual misdeeds were brushed under the rug by the Media Left.

These stories are endless. Who could forget US senator Ted Kennedy of Massachusetts drowning Mary Jo Kopechne in 1969 and then, 11 short years later, running for president without a word of protest from the Democrats or the feminists. And how about homosexual congressman Barney Frank of Massachusetts with the following tidbit from wikipedia.org:

‘In 1985 Frank… hired Steve Gobie for sex, a male prostitute, and they became friends more than sexual partners. Frank housed Gobie and hired him with personal funds as an aide, housekeeper and driver and paid for his attorney and court-ordered psychiatrist.’

When Democrat US congressman Gerry Studds of Massachusetts was found to have been engaging in gay sex with an underage male congressional page, he was re-elected six times thereafter. According to wikipedia.org:

The House voted to censure Studds, on July 20, 1983, by a vote of 420-3. … Studds received two standing ovations from supporters in his home district at his first town meeting following his congressional censure.’

Just imagine – standing ovations over statutory rape. Unbelievable… But let a conservative glance sidewise at an adult woman in the workplace and the wrath of the Democrats and feminists comes crashing down. Even before all the facts are known.

Don’t let the liberals fool you. They will seek to deflect attention from the real crisis in this story, that of modern-day feminism and Democrat-encouraged culture of promiscuity and the resulting crimes.

Please visit my blog at www.nikitas3.com for more conservative insights.

In Case You Missed It:  Australia sees 63% drop in births after introduction of covid “vaccines” â€“ what will the government’s excuse be?
Posted in Freedoms and tagged Crime, Democrats, Freedom, Liberalism, Sex, Sexual Harassment.

Norway's sovereign wealth fund has blacklisted 2 Israeli companies over their involvement in construction in the eastern part of Jerusalem....