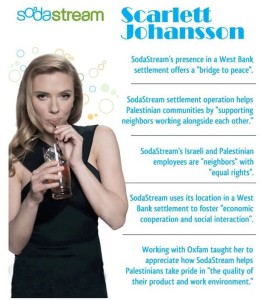 While the likes of MSNBC’s Chris Hayes are criticising actress Scarlett Johansson’s decision to stand by SodaStream and Israel and ditch the politicking Oxfam, there is another group of people whose opinions on this issue should be heard: the Palestinians employed by SodaStream in the West Bank.

Earlier this month, Johansson and Oxfam came to blows over the actress’s appearance for and endorsement of SodaStream, a company which has factories in the Israeli-occupied West Bank.

And while there are of course many Palestinians not employed by the company who oppose the West Bank factories, the resounding consensus from employees and their dependents seems to be one of excitement and gratitude towards the Israeli-owned firm. Over 500 Palestinians are able to earn three times as much as the average Palestinian worker—and even more than Israel’s own minimum wage.

One worker told NPR: “It’s an excellent place to work. It provides a good salary and they treat us very well. At SodaStream, they do not discriminate between Arabs, Jews, or any ethnic group.”

But there are those for whom the status quo and the “pro-Palestinian” lobbying that goes along with it is more important than Palestinian jobs and economic liberties.

MSNBC’s Chris Hayes, while not the worst of all culprits, illustrates how ignorant yet politically exigent statements contribute very little to a solution in the region. Earlier Thursday he stated, “Well I’m sure the Hollywood actress getting paid $ for sponsorship and not the NGO that feeds people is right about this particular policy.”

One wonders if the liberal media darling getting paid $ for pushing a particular narrative and not the Palestinian worker is right.

Another Palestinian told CSMonitor what he thought of Oxfam and many other organisations’ boycotts of Israel and Israeli companies operating in the West Bank: “Before boycotting, they should think of the workers who are going to suffer.” The man previously is said to have earned 20 shekels ($6) a day plucking and cleaning chickens but now he makes nearly 10 times that at SodaStream, which also provides transportation, breakfast, and lunch.

One of his fellow Palestinians remarked: “I would love to work for SodaStream. They’re quite privileged. People look up to them. It’s not the people who want to boycott, it’s the officials.”

So why does the so-called “pro-Palestinian” (read: anti-Israel) lobby fail to concern themselves with the welfare and rights of ordinary Palestinians?

One Palestinian man claims it is because “When they [Israelis] provide work for the Palestinians, it’s a way of beautifying the image of the occupation,” whereas the SodaStream CEO says that while he isn’t in favour of the settlements in the West Bank, he doesn’t “want to send 5,000 people into hunger because some activist group thinks that’s going to promote peace.”

If we’re talking about human rights in its truest form, surely the right to economic liberty trumps an unprovable notion of what you perceive your neighbours’ government to be doing in order to “beautify” their policies. If it doesn’t, then you have to question many NGOs’ use of the phrase “human rights” at all.

A fly called Apocephalus borealis, lays its eggs in a bees' abdomen. The eggs take about a week to hatch...