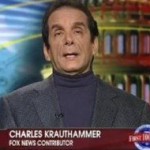 Krauthammer pointed to a double standard in Washington and asserted that if the President were a Republican, “the people would be up in arms and would be impeaching.”

According to Krauthammer, the President has circumvented Congress “at least 15 times” on issues such as immigration, climate change, and most recently Obamacare. He specifically referred to the Dream Act, in which Obama implemented certain parts of the pending legislation in 2012.

The executive order debate resurfaced when Obama announced at his State of the Union address, “I will issue an Executive Order requiring federal contractors to pay their federally funded employees a fair wage of at least $10.10 an hour.”

Heritage Foundation Legal Fellow Andrew Kloster, who has argued that Obama’s unilaterally raising the minimum wage is likely unlawful, told The Foundry that Krauthammer is absolutely correct that the President Obama has taken an unlawful “go it alone” approach.

“Whether it is making unlawful payments to congressional health care plans, making recess appointments in violation of the Constitution, or urging federal contractors to violate the WARN Act,” Kloster said, “this administration has taken numerous actions that are abusive or plainly unlawful.”

Kloster noted that Obama’s actions are often justified on the grounds that “if Congress won’t act, I will.” He said that is not what not consistent with Constitution:

Frankly, circumventing the constitutional role that Congress plays in our Republic cannot be justified, no matter what the policy goals. Every President takes an oath to “preserve, protect, and defend the Constitution” and has a constitutional duty to “take Care that the Laws be faithfully executed.” President Obama should always put that oath and his constitutional duty first. is politics, his legacy, his party — all these should come a distant second.

In Case You Missed It:  BREAKING: President Trump Announces NEW Information From ARIZONA: “It Is Damning And Determinative! Will Be Discussing This Today.”
Posted in Tyranny and tagged Congress, Constitution, Crime, Foundry, Freedom, Governments, Liberalism, Obama, United Socialist States of America.

When Bill Clinton signed off on the North American Free Trade Agreement and the General Agreement on Trade & Tariffs...