U.S. Secretary of State John Kerry is once again the target of criticism, direct and indirect, by Israeli leaders after he suggested that Israel could face “delegitimization” and “boycott” campaigns without a peace deal with the Palestinians. 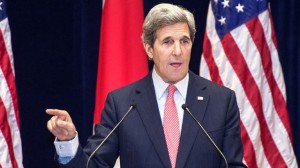 That remark, made Saturday at the Munich Security Conference, prompted Economy Minister Naftali Bennett to slam Kerry: “We expect our friends around the world to stand beside us, against anti-Semitic boycott efforts targeting Israel, and not for them to be their amplifier,” Bennett said on Saturday evening.

Israeli Prime Minister Benjamin Netanyahu also responded, albeit indirectly, dismissing the threat of boycotts: “Firstly, they only serve to make the Palestinians become more entrenched in their stance of refusal. Secondly, no pressure will make me abandon the State of Israel’s vital interests, of which security of the civilian population is foremost.”

The U.S. State Department attempted to clarify Kerry’s remarks Sunday, saying that Kerry’s remarks were a warning, not a threat, and that the Obama administration did not support boycotts.

Kerry has triggered the ire of Israeli leaders with similar “warnings” before. In November 2013, he warned that Israel could face terrorism if it did not reach an agreement: “The alternative to getting back to the talks is the potential of chaos. I mean, does Israel want a third intifada?” Israelis recoiled at the implication that they alone bore the burden of peace, and that terrorism would be an expected, or even legitimate, response.

In January , Israel’s Minister of Defense was quoted as saying Kerry was “messianic” and “obsessed” with the peace process.

On that occasion, Israeli leaders were swift to distance themselves from the remarks, and the minister quickly apologized. Yet this time, Kerry has unified Israeli leaders against him, and it is the Obama administration that is backtracking.

Meanwhile, Palestinian leaders are stepping up their efforts to isolate Israel and defy the U.S., inviting Iran to intervene in the conflict with Israel.

Kerry, who has been to the region ten times in less than a year in office, is increasingly perceived by Israelis as attempting to impose an unworkable “solution” on them.

Cantor: ‘Obamacare is on borrowed time’

The end of the Affordable Care Act is within sight, House Majority Leader Eric Cantor says, outlining Republican plans to...