Today, Israel’s enemies are waging a sustained propaganda campaign depicting Israel as an “Apartheid State” reminiscent of the despised white minority regime that once ruled South Africa. Their aim is to turn Israel into an international pariah, isolated and boycotted by the other nations of the world until it is eventually forced out of existence. 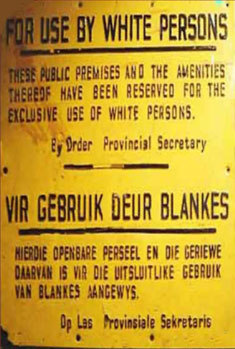 Is there any basis to this comparison? Before answering this, we need to clearly understand what Apartheid actually was.

Apartheid in South Africa was the imposition of institutionalized race-based separation in every conceivable field, from the political arena through to place of residence, citizenship, public amenities, education, politics, the labor market and even the bedroom. It blatantly discriminated in favor of the white minority. Non-whites lived in a legislative strait-jacket, their every movement controlled by patently iniquitous laws and their natural desire to better themselves deliberately hamstrung by a system that explicitly aimed at keeping them in a state of permanent subservience.

Apartheid in South Africa was based on racial criteria and such racism was mandatory. Even whites opposed to racist policies had no choice but to comply with them. Courts had to enforce apartheid legislation, no matter what the personal feelings of the judges might have been, universities had no choice but to base their admissions policies on racial criteria and businesses could not employ qualified blacks in senior positions.

Non-Whites – Blacks, mixed race people and Asians, mainly Indians – suffered from the legalized deprivation aimed at imposing white domination on the rest of the population. The law not only denied the vote to Non-Whites, but legislated to force discrimination in every conceivable way.

The comparison between apartheid-era South Africa and modern-day Israel is a palpably false one. In reality, of all the countries in the Middle East, Israel is the least discriminatory, particularly with regard to the rights of religious minorities. It would be much more plausible to make a case for Saudi Arabia, Syria, Iran and other neighboring states to be ‘apartheid’ societies.

Apartheid was not just a word, but an entire legal and social system, an all-encompassing system of repressive laws that enforced racial segregation in all walks of life at the expense of the non-white majority. In order to make the Israel=Apartheid analogy stick, one has to be able to compare those laws with the situation as it exists in Israel. Doing so quickly reveals the comparison to be false in virtually every detail. Check it out for yourself: [Attachment: Israel and Apartheid: Let’s Really Compare Them]

Israel’s policies in the West Bank, specifically Jewish settlement activity and the increasingly stringent security measures imposed on the Palestinian population after September 2000, are often compared to similarly repressive methods of population control inflicted on the black majority under apartheid. For example:

In reality, of all the countries in the Middle East, Israel is the least deserving of the title “apartheid state”. Discrimination, including the denial of equal political, religious and economic rights to minorities, is not the exception but the norm throughout the region. Legalised discrimination is usually based on religion but sometimes also on ethnicity, as is the case in Syria and Lebanon.
Attachment: Discrimination in the Middle East – Four Case Studies

In Case You Missed It:  POLL: Trust In Media Sinks To Just 36 Percent – Second Lowest Ever
Posted in Freedoms, Israel and tagged democracy, Freedom, Israel.

Government officials in the USA who abused zoning authority powers to cower citizens into submission and deprive land owners of...