The footage is old, and the quality grainy, but the message is unmistakable. 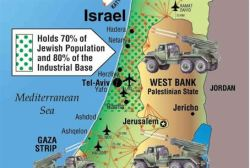 A public relations video produced by the IDF Spokesperson’s Unit more than 30 years ago makes the case for Israel to retain the Judea and Samaria region, from a purely military perspective, and offers a unique glimpse into a very different age, in which official Israeli government bodies were not shy of articulating the need for the Jewish state to maintain control over its Biblical heartland.

Entitled “9 Narrow Miles” – a reference to the perilously slim waistline of the Jewish state without Judea and Samaria – the video was released in 1980, in the days before the Oslo Accords, which saw Israel effectively cede parts of the region to the Palestine Liberation Organization (PLO) and its Palestinian Authority (PA). After accepting the Accords as a pillar of government policy, much of the Israeli establishment became fixated on the idea of an independent Arab state in the Biblical heartland. At the time of the recording, however, while Israel’s political establishment prevaricated over what to do with the region – which, as the cradle of Jewish civilization, includes ancient Jewish sites such as Hevron, Shechem and of course the Temple Mount – the country’s security experts had little doubt as to the existential strategic importance of retaining Judea and Samaria.

The film was released to explain Israel’s case to the outside world – and specifically to English-speakers. Though it might seem hard to believe now, in the days before Twitter and live blogs, it really was the cutting-edge of Israel’s PR efforts.

But following the decision to pursue a “Two-State Solution” which would involve ceding all or most of the region, such positions became politically-incorrect. Not only was the video, and many others like it, shelved – they were set to be destroyed, as embassies around the world were instructed to “dump” materials which did not sit with the accepted political orthodoxy.

After giving a brief overview of the region’s history, the gritty-yet-effective video illustrates how without Judea and Samaria, with more than two thirds of Israel’s population and the vast majority of Israeli industry concentrated in a narrow strip of land between just 9 and 22 miles wide, Israel’s major population centers are entirely at the mercy of enemy guns looking down from the Samarian hills. The video also illustrates how Israel’s only international airport – Ben Gurion – lies totally exposed to a potential attacker positioned on those same hills, something which will come as no surprise to Israeli residents of the region.

The footage was salvaged by American activist and Arutz Sheva contributor Mark Langfan, who is himself an avid advocate for Israeli sovereignty in Judea and Samaria, in the early 1990s. Langfan’s group, Americans For a Safe Israel (AFSI), have published numerous (somewhat more modern) visual aids communicating essentially the same message as the video: that Israel’s security relies on retaining control over the highlands of Judea and Samaria.

“It’s unbelievable. They were going to throw all of this stuff away because it suddenly didn’t fit their agenda any more,” recalled Langfan. “A friend of mine working at the embassy called me and said ‘Look, Mark, we’ve got all this stuff and we don’t know what to do with it. They want us to throw it away but I think you might have a better use for it’.”

Of course, not all of the military consideration remain the same today, and Israel’s security situation vis-a-vis neighboring states is considerably less precarious given the Jewish state’s overwhelming conventional military superiority – a fact which US Secretary of State has been trying to use to persuade a full withdrawal.

But perhaps the most notable strategic difference, and one which is painfully obvious from the film itself, is the importance of the Jordan Valley, which acts as a buffer to a conventional military invasion from the east.

To this very day, the received wisdom among the Israeli establishment is that in the event of a withdrawal from the rest of Judea and Samaria, keeping the Jordan Valley would at least secure Israel’s borders.

But whereas at a time when Israel’s greatest strategic threat came from the conventional forces of its neighbors, such a buffer zone would likely have “done the trick” – keeping central Israel out of the sites of hostile forces and their artillery – the present ability of terrorist groups to acquire mobile, medium-to-long-range rockets (for example, in Gaza) renders such a calculation obsolete. With Israeli forces gone, existing terrorist groups could easily deploy along the Samarian highland.

It’s a topic which Langfan has been particularly vocal about.

“It’s like guarding the door when the bad guys are already in your house,” Langfan notes. “Those who still think that the Jordan Valley alone can guarantee Israel’s security need to take a look at this video. They are applying old, obsolete military paradigms to the current reality for political reasons. They’re playing with lives.”

Explosive Report: How Obamacare Will Drive People Out of the Workforce

Obamacare moves people further away from jobs and shifts their health care costs to taxpayers. Good news or bad? The...