Following news that at least 1,800 personnel records for veterans were destroyed or purposely misplaced at the Nation Personnel Records Center (NPRC), U.S. Senator Jim Inhofe (R-Okla.) sent a letter today to NPRC Director Scott Levins seeking an explanation on how this could have occurred and what steps are being taken to prevent another incident. 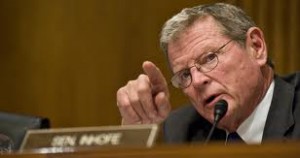 The NPRC is located in St. Louis County, Missouri, and is an agency of the National Archives and Records Administration. According to the NPRC website, the center holds historical military personnel records of nearly 100 million veterans as well as all inactive federal personnel records, both military and civilian. Many of these records include individuals’ social security numbers. Inhofe’s office regularly works with the NPRC for all Army and USAF records as well as certain Navy records when helping to resolve a casework need for a veteran.

According to a Stars and Stripe articles on Jan. 30, roughly 1,800 records are known to have been destroyed or purposefully misplaced, but the total number of compromised files is not yet known.

Inhofe’s letter notes that, “Social Security numbers of 300 veterans were found on 241 documents in the woods near your center.”

As the Ranking Member of the Senate Armed Services Committee, a strong supporter of our veteran community and a veteran, I am deeply disturbed to hear of the criminal destruction of more than 1,800 personnel records for U.S. veterans by at least two of your employees at the National Personnel Records Center (NPRC).  I seek (1) an immediate explanation of how this could occur, and (2)what steps you are taking to ensure that this does not happen again.

As you know, proper maintenance of a veteran’s record is vital.  Without adequate records, it is extremely difficult, if not impossible to receive much needed and well deserved benefits.  In addition, families of deceased veterans are not able to obtain proof of service.

Your own NPRC website says “The National Archives values the privacy of our veterans very highly and we actively protect their files stored here from disclosure to unauthorized individuals.” However, names and Social Security numbers of 300 veterans were found on 241 documents in the woods near your center.  It is my understanding that your employees are paid for speed in handling these documents which evidently led some to intentionally misfile, “stash and trash” records to finish more quickly.

In light of these significant shortfalls in policy and standards, I seek your full explanation into how this breach could have occurred and what steps you are taking to ensure this does not happen again.

The men and women in uniform who put their lives at risk defending our freedoms deserve at the very least to be free from worries that their military records are intentionally destroyed and their privacy jeopardized.  I look forward to your reply.

A copy of the letter can also be read by clicking here.

In Case You Missed It:  VACCINE REBELLION: Growing number of US states are refusing to go along with Biden's covid vaccine fascism
Posted in Freedoms and tagged CNSNews, Congress, Freedom, Governments, United Socialist States of America.

Democratic Islam In 1995, after an invitation from Norwegian political parties, Maryam Rajavi visited Oslo to meet with them. There,...