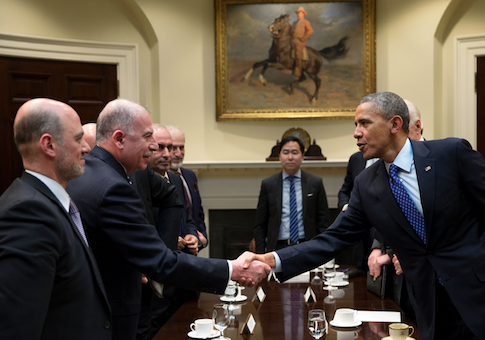 A senior member of the Muslim Brotherhood was recently hosted at the White House for a meeting with President Barack Obama, prompting an outcry from critics of the global Islamist organization.

Anas Altikriti, a top British lobbyist for the Muslim Brotherhood whose father heads Iraq’s Muslim Brotherhood party, recently met with the president and Vice President Joe Biden as part of a delegation discussing problems in Iraq.

Altikriti, whose work has also been tied to Hamas, can be seen smiling in photos published by the White House as he stands next to Iraqi Parliament Speaker Usama al-Nujaifi, who is pictured shaking hands with President Obama in the White House’s Roosevelt Room. The meeting was first highlighted by the blog Harry’s Place.

The Obama administration has been criticized its outreach to the Muslim Brotherhood, the international Islamist organization whose members’ brief reign in Egypt was supported by the White House.

Nujaifi, Altikriti, and other members of the Iraqi delegation were in town late January to discuss al Qaeda’s growing presence in Iraq. Nujaifi himself was reported to have met twice with President Obama, though it remains unclear if Altikriti accompanied him on both occasions.

“President Barack Obama greets Speaker Osama al-Nujaifi, Iraqi Council of Representatives, after he drops by Vice President Joe Biden’s meeting with the Speaker in the Roosevelt Room of the White House,” read the White House’s photo caption, which clearly shows Altikriti standing to al-Nujaifi’s right side.

A White House spokesman confirmed that Altikriti was brought to the meeting to serve as a translator for al-Nujaifi.

“This afternoon, President Obama joined Vice President Joe Biden’s meeting with Iraqi Council of Representatives Speaker Osama al-Nujaifi and a delegation of Iraqi parliamentarians,” read a Jan. 22 statement issued by the White House about the meeting. “Both sides reaffirmed the importance of the strategic partnership between the United States and Iraq.”

Altikriti’s presence in the White House was surprising to many who said the U.K. organization he heads, the Cordoba Foundation, has been singled out by British Prime Minister David Cameron as the “political front for the Muslim Brotherhood.”

Paul Stott, an U.K. academic and expert in British jihadism at the University of East Anglia, said Altikriti’s presence in the meetings represents “part of the long term U.S.-U.K. engagement with the Muslim Brotherhood, a strategy which hit choppy waters when it became clear people in Egypt were far from ready to let the [Muslim Brotherhood] run the country the way they wanted.”

“The coup could have put paid to this glad handing, but it is clearly continuing,” Stott said.

Altikriti has been called the “key political lobbyist for the Muslim Brotherhood in Britain.”

His Cordoba Foundation has been criticized for working “closely with other British extremist groups which seek the creation of an Islamic dictatorship, or caliphate, in Europe,” according to the British Telegraph newspaper.

Altikriti formerly served as a spokesman for the British Muslim Initiative (BMI), a group that has been singled out for close links to Hamas. BMI’s founder and president Mohammed Sawalha has served as a senior military operative for Hamas.

Altikriti himself has stirred controversy for publicly backing Hamas and advocating that Iraqis use “any means and methods” to free themselves from occupation.

Altikriti also defended the Muslim Council of Britain’s 2007 decision to boycott Holocaust Memorial Day. He referred to the group’s position as a “principled stand.”

The Cordoba Foundation did not respond to a request for comment.

At What Point Will People Scream ‘ENOUGH’?

By David Limbaugh February 7, 2014 6:55 am President Obama must believe he's politically untouchable at this point, given his seeming...