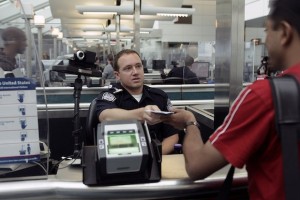 I am sorry to have to report yet another event that makes me question not only the Obama administration’s intent and motivation, but more fundamentally, its allegiance. Naturally, this latest action by the administration is receiving little attention.

Now you would think refugees and asylum seekers who have provided “limited material support” to terrorists might be barred access to our country. But not according to the Obama administration. On Wednesday, the Department of Homeland Security and the State department wrote new exemptions for the Immigration and Nationality Act which narrowed a ban to exclude refugees and asylum seekers who had supported terrorists.

Thankfully, not everyone in DC thinks this is a good idea. As reported in the Daily Caller,

Alabama Republican Sen. Jeff Sessions offered a scathing rebuke of the Obama administration’s decision. Senator Sessions is a stalwart champion in the fight against amnesty for illegal immigrants and protecting our sovereign Republic. He stated, “Not only is this a national security issue, but a financial issue: those granted admission gain access to federal welfare programs funded by U.S. taxpayers. It seems the Obama Administration has forgotten that our immigration laws are meant to protect the interests of Americans.”

Last week, Speaker John Boehner said immigration reform legislation will not happen this year due to President Obama’s penchant for unilaterally and selectively enforcing only those laws he approves. Do you realize how seriously frightening this is? After all, it is a violation of the president’s oath of office not to uphold the Constitution and faithfully execute the laws of this Republic – and the Speaker of the House says it as a matter of fact.

“In light of these and other facts, it is thus deeply alarming that the Obama Administration would move unilaterally to relax admissions standards for asylum-seekers and potentially numerous other applicants for admission who have possible connections to insurgent or terrorist groups. This includes terror groups not yet designated: al-Qaida was not designated by the Department of State as a foreign terrorist organization until 1999 — long after the first attack on the World Trade Center.”

A Department of Homeland Security official explained the reasoning behind the exemptions, saying “These exemptions cover five kinds of limited material support that have adversely and unfairly affected refugees and asylum seekers with no tangible connection to terrorism: material support that was insignificant in amount or provided incidentally in the course of everyday social, commercial, family or humanitarian interactions, or under significant pressure.”

I absolutely agree with Senator Sessions, as I’m sure many of you would when he said,

“The DHS does not have the authority to eliminate portions of the law, stating the department’s claim, leaves one incredulous. It is one thing to approve a waiver in a particular case with uniquely compelling circumstances; it is entirely another thing to declare a plain legal requirement is null and void. What is the point of Congress passing a law if the Administration abuses its ‘discretion’ to say that law simply no longer applies? This is yet one more instance of the Administration rewriting U.S. code through executive decree.”

Many of you are asking, what can be done? We need lawsuits to be filed against President Obama by Congress, regardless if the DC Circuit Court is now stacked with his selected cronies. We also need citizens who can prove legal “standing” to file lawsuits against this unconstitutional administration, which means they must demonstrate concrete evidence of invasion of their legally protected interests.

Most importantly, we need those who are concerned for the future of this Republic to cast the correct vote in November to ensure there is a conservative House and Senate a year from now on Capitol Hill. In which case, if this lawlessness continues from President Obama, there is a Constitutionally-established method to return him to Chicago.

What can possibly be the motivation and intent of eliminating the law barring entry into America for those who have offered support to terrorism, regardless of degree or circumstance? I will leave it up to you to determine the answer – but it’s just another aspect of the “fundamental transformation” of America.

In Case You Missed It:  “This is Our New Declaration of Independence” – Wendy Rogers Unveils Letter Signed by 41 State Legislators From 15 States Calling For a Nationwide Audit and Decertification
Posted in Terrorism, Tyranny and tagged al-Qaida, Immigration, Islam, Obama, Terrorism, United Socialist States of America, White House.

How stupid does Obama think we are?

Just last month we had the State of the Union. This past week, we see Obama’s state of confusion. I...