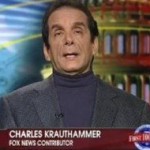 Krauthammer says that delaying the employer mandate simply to ease political pain before an election is the kind of stuff they do in banana republics:

But generally speaking you get past the next election by changing your policies, by announcing new initiatives, but not by wantonly changing the law lawlessly. This is stuff you do in a banana republic. It’s as if the law is simply a blackboard on which Obama writes any number he wants, any delay he wants, and any provision.

It’s now reached a point where it is so endemic that nobody even notices or complains. I think if the complaints had started with the first arbitrary changes — and these are are not adjustments or transitions. These are political decisions to minimize the impact leading up to an election. And it’s changing the law in a way that you are not allowed to do.

Right after Krauthammer makes his case for the lawlessness of delaying part of Obamacare yet again, Ron Fournier from the National Journal disagrees on the basis that the administration would argue it’s a tax and thus the Treasury has the ability to amend regulations. Krauthammer argues that they can amend regulations for the purpose of implementing the law, but not for easing political pain. A convinced Fournier appears to respond (off-camera) “fair enough, when you put it that way I agree with you.”

Last September Abbas called murderer of 15 civilians "a legend... a hero... a beacon" by Itamar Marcus and Nan Jacques...