(WSJ) You might think the question would be settled by now, but the U.S. Supreme Court has yet to opine on whether the Second Amendment right to “bear” arms for self-defense extends outside the home. 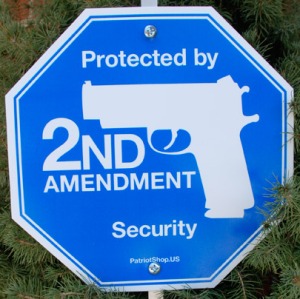 We may soon get an answer. Lyle Denniston, writing for the Constitution Daily, reports about two gun rights cases that may get a hearing before the U.S. Supreme Court. Both cases hinge on the difference between the right to “keep” a gun and a right “bear” one. The National Rifle Association thinks the issue is ripe for Supreme Court review. The justices are expected to discuss the cases next week and may then decide whether to grant review.

The Supreme Court in 2008 made it clear that the right to “keep” a gun is a personal right, and that it means one has a right to keep a functioning firearm for self-defense within the home. But it has refused repeatedly since then to take on the question of whether that right exists also outside the home. If there is a separate right to “bear” a gun (and the Court, in fact, did say in 2008 that the two rights were separate), it has not said what that means.

The NRA says you can’t really ‘bear’ something in the privacy of your home.

“The explicit guarantee of the right to ‘bear’ arms would mean nothing if it did not protect the right to ‘bear’ arms outside of the home, where the Amendment already guarantees that they may be ‘kept,’ ” write the NRA’s lawyers in one of their petitions to the high court. “The most fundamental canons of construction forbid any interpretation that would discard this language as meaningless surplus.”

The federal government wants the Supreme Court to take a pass. If the justices agree to hear the cases, they might not get to them until their next term, beginning in October.

In Case You Missed It:  CDC Restates Recommendation For Masks on Planes Despite Court Ruling That Struck Down Biden’s Mandate
Posted in Freedoms and tagged Freedom, U.S. Supreme Court, US Citizen.

Obamacare employer mandate delay: “This is stuff you do in a banana republic”

Krauthammer says that delaying the employer mandate simply to ease political pain before an election is the kind of stuff...