Few countries have more negative myths associated with them than Russia. There are old myths about Russia being inherently authoritarian. There are new myths about Russia helping dictators or suppressing the gays. You can fight myths the long way – by finding gay bars in Moscow or by fishing out facts about Russia’s foreign policy in biased Western media. 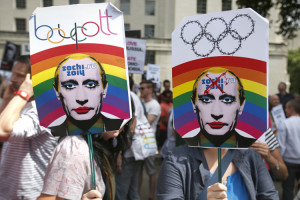 The liberal western media wants you to think its illegal to be a homosexual in Russia, but reality is it is not.  Its not Iran a place when in fact it is illegal, and the Islamic republic puts it citizens to death for being Homosexual, but Russia does not. The Russian law is the banning the “propaganda of non-traditional sexual relations to minors”. The law does not allow for the promotion of homosexuality in public, IE: Pride parades etc, as homosexuals in the past have been know to bring items to these parades not fit for children to being seeing them, like the items usually behind the black curtain at the adult shops, not to mention dressing in thongs and other odd things probably not fit for public display.

Bottom line there is no “anti-gay law” in the first place, since the word “gay” is never mentioned in the law. The name of the law in English is translated to: “On Protection of Minors From the Information which Can Damage Their Health and Development”. The liberal media won’t tell you is that no person so far has paid any fines mentioned in this law and that that the new Russian legislation indeed uses fines and, not prison terms like they would in the Islamic world.

As a result we have a whole bunch of fake media nightmares which include, I quote, “a total ban on homosexual relationships in Russia” or “ a ban on any public discussion of homosexuality”. Even though such bans don’t exist in Russia, the global media keeps talking about them, usually not even mentioning the facts that don’t fit their theory. In fact, if any public mentioning of homosexuality had indeed been banned, the following statement of Russia’s president Vladimir Putin would not be possible. Here is this statement which he made in autumn 2013 preparing for a meeting with the leaders of Russia’s LGBT community.

“People of the non-traditional sexual orientation are not discriminated against. They do not encounter any professional limitations, there is no discrimination in the amounts of their salaries. If they achieve good results at their jobs or produce artistic masterworks, their achievements are recognized by the state, which gives them orders and medals for their work. They are full-fledged and equal citizens of the Russian Federation”.

It would be fine if the Western media just forgot to mention that there are gay bars in Russian cities, yes they have them but you won’t hear about them on CNN.

Martyn Andrews, a British journalist who works at the RT television station and has a personal experience at Sochi and Moscow gay bars, in summer passed a reassuring message to the British actor Steven Fry. Mr. Fry, like so many uninformed people in the West, believed the myth about a ban on homosexuality in Russia and made a rather trivial appeal to an Olympic boycott on the matter. So, here is what Martyn Andrews had to say:

“I think that Steven Fry’s message is wrong. I think, first of all, that he should talk about other countries, because there are 70 other countries in this world where homosexuality is indeed illegal and sometimes punishable by death. It is very interesting that [one of these countries], the emirate of Qatar is not even mentioned in the Western press in this context, even though Qatar will host the World Cup. Why is that? Because we are talking about soccer, about football, which even in the UK is homophobic in itself. So, Qatar is not mentioned, but there seems to be so much anti-Russian propaganda coming from the West. Just because a law is put in place, it does not mean that bias against the gays will filter down to reality. And I, for one, will tell anybody that foreigners will not be arrested for simply walking the streets if they are gay.”

In September Russia’s president made several statements reassuring the gay community in Russia and promised to ponder upon the possibility of an extended meeting with LGBT activists from all over Russia. However, that did not stop the already launched propaganda campaign in the West. The liberal media,interprets this law in a one-sided way to fit their agenda of propaganda and distortions, the sames lies and deceit we see from the left in the US media regarding conservatives..

In Case You Missed It:  COVID IS JUST THE EXCUSE: Governments to demand constant surveillance of your blood, body fluids and medication compliance
Posted in Freedoms and tagged homosexuality, Liberalism, Russia, United Nations.