Any discussion about free speech in America must begin and end with the NDAA in which the Obama administration can snatch anyone off the street, without due process, and hold them indefinitely. This kind of unbridled power has a devastating effect on free speech. 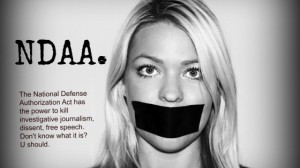 Prior to the 2012 election, David Axerlrod, announced that Obama would push for a constitutional amendment to rollback free speech if he was re-elected. Obama is making good on that promise. Obama’s promise to destroy free speech combined with the passage of the NDAA, constitutes a lethal cocktail for all freedom loving Americans.

What is going on in America in terms of an attack upon the First Amendment is unprecedented. The assaults upon First Amendment rights are not in response to a perceived crisis. The Obama administration attacks upon freedom of speech are not standalone events. And the scope of these attacks upon free speech are incremental and appears to be aimed at eliminating all free speech, thus rendering the government and its officials immune from criticism.

The Obama administration is attacking the First Amendment in unprecedented ways in this country. The assaults began in 2012 with H.R. 347 and have accelerated to effectively outlawing legitimate political activity by grassroots organizations and minor political parties. America is one short step away from having its free speech rights obliterated from the annals of history.

Two years ago, when Congress passed H.R. 347, entitled the Federal Restricted Buildings and Grounds Improvement Act, it passed the House by a vote of 399-3 and hardly anyone noticed. Certainly, with this type of landslide vote, nobody in Congress seems to care about the First Amendment.

H.R. 347 was designed to “improve” public grounds by moving all protesters “elsewhere”. The law claims it is merely an update to an old law, Section 1752 of Title 18 of the United States Code, that restricted areas around the president, vice president, or any others under the protection of the Secret Service.

The original law was enacted in 1971 and amended in 2006. The law, in effect has not been fundamentally altered since its initial passage. However, what has significantly changed since 1971, are the types of events and individuals warranting Secret Service protection.

Under the present law, any occasion that is officially defined as a National Special Security Event (NSSE) automatically warrants Secret Service protection. NSSE’s can include college bowl games, major PGA golf tournaments, basketball championships, rock concerts, and even the present Winter Olympics. The Super Bowl and the World Series have been declared a NSSE since 9/11. Further, it is the President who determines who is eligible for Secret Service protection under the NSSE provisions. This shields any and all public figures from legitimate protest.

The net effect of H.R. 347 is to limit to any politician, public figure deemed by the President to be in some kind of danger. However, the Super Bowl, nor a rock concert constitutes government business. This is a clear abuse of power, but it does not stop with H.R. 347.

Close to my home , near Arizona State University hired Washington Times freelance reporter, Leonard Downie, who subsequently examined a range of Obama administration tactics that hinder government transparency. These include the unprecedented use of the Espionage Act in prosecuting media leaks, classifying government documents as secret when no harm could come from their release, increased government surveillance that jeopardizes the safety of news sources, Freedom of Information Act violations, and White House-produced content that can’t substitute for independent, accountability journalism.

David Sanger, chief Washington correspondent for The New York Times, said “this is the most closed, control freak administration I have ever covered.”

Political dissent is protected under the First Amendment, as is political activity. The current administration is attempting to silence millions of Libertarians, Constitutionalists and Tea Partiers by attempting to pass new regulations which will destroy free speech rights.

America, you need to pay close attention to this development. The IRS is trying to silence millions of Tea Partiers and third party candidates by destroying free speech rights. If these regulations are allowed to stand, Americans will be forever silenced.

Please keep in mind that the following regulations only apply to third parties, grassroots groups and the Tea Party. These regulations will make it illegal to:

1.   Mention a candidate up for re-election within 60 days of an election. That includes every single member of the House of Representatives. Effectively, you will not be able to petition your own elected representatives.

2.   The aforementioned groups will not be allowed to register voters. Does this put anyone else in the mind of the old Jim Crow laws which were designed to prevent the registration of African-Americans.

In Case You Missed It:  Why Socialism Always Fails: Socialism The Leftist Lie of the Twentieth Century

3.   Call for the election or defeat of a political candidate. This will effectively eliminate all recall provisions in State Constitutions.

4.   Hold candidate forums so voters can decide who would best represent them In other words, primary election activities for third party candidates would be prohibited. This provision would cut the proverbial legs out from under any political party or movement.

The IRS is trying to silence millions of American voters. They’re trying to pass new regulations that will destroy our free speech rights and this constitutes a complete end run around Congress and ultimately the Constitution.

I am calling for a massive campaign to protest this IRS action. You may send your comments to the IRS at this link.

There is a definitive reason why the Founding Fathers made the act of free speech the FIRST AMENDMENT to the Constitution. Without question, it is our most important right.

“To announce that there must be no criticism of the President, or that we are to stand by the President, right or wrong, is not only unpatriotic and servile, but is morally treasonable to the American public.”

“Whoever would overthrow the liberty of a nation must begin by subduing the freeness of speech.”

“If freedom of speech is taken away, then dumb and silent we may be led, like sheep to the slaughter.”

When freedom of speech disappears from our political and social landscape, it is almost always a portend of very bad things to come. These events are the chest pains before the heart attack. We can be silent, like so many victims do, or we can take action in mass displays of civil disobedience. And all we have to do is to speak out.

An ongoing federal investigation is raising questions about the Colorado marijuana industry's ties to illegal drug operations and the open...