An Islamic terrorist from Jordan briefly worked as an Obamacare navigator in Illinois she was involved in a deadly grocery store bombing and two other terrorism attacks. 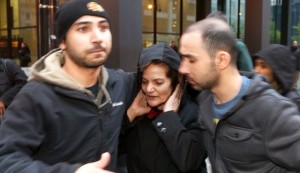 Rasmieh Yousef Odeh was convicted in Israel for her role in several bombings, including the 1969 attack on an upscale Shufersol grocery store, which killed two Hebrew University students who had stopped in to buy groceries for a hiking trip in the Jerusalem hills. Leon Kanner and Eddie Joffe were killed by a bomb hidden in a candy box tucked on a shelf, which also injured nine or 10 others, according to a website maintained by the Israeli government to commemorate terror victims.

The Illinois Department of Insurance later revoked Odeh’s certification as a Obamacare Navigator In-Person Counselor on November 24, explaining in a disciplinary report that the decision was “based on an investigation which revealed that she had been convicted in Israel for her role in the bombings of a supermarket and the British Consulate in Jerusalem.

Odeh, who has as many as nine aliases, was indicted in October for allegedly lying on her U.S. immigration and naturalization application papers. On Dec. 9, 2004, she had been sworn in as a U.S. citizen in a district court in Michigan, the same state where bombing victim Kanner had spent six months studying English. If Odeh is convicted, she could lose her U.S. citizenship and serve up to 10 years in prison. Separately, the Illinois Insurance Code permits civil penalties to be levied after a hearing on any Obamacare navigator whose certificate has been denied, suspended or revoked.

On Feb. 21, 1969, PFLP members planted bombs at the Shufersol supermarket, as well as the British Consulate in Jerusalem. “One of the supermarket bombs malfunctioned and did not detonate,” the indictment says, adding that “the bomb left in the courtyard of the British consulate was discovered and removed to a safe place.” Less than a week later, the indictment says, the PFLP members left another bomb at the British Consulate, which detonated but caused only structural damage.

On March 1, 1969, Odeh and four others were arrested for these bombings. According to a Nov. 19 discovery notice, a military court in Israel convicted her for membership in an illegal organization, as well as for participating in all three bombings. Odeh was sentenced to life in prison, the indictment says.

In a 2004 documentary, Women in Struggle, a woman named Ayesha Oudeh—identified in news reports as either Rasmieh Odeh’s sister or her “comrade” – said in an interview: “Rasmiyeh Oudeh was more involved than I was [in the grocery store bombing] … I only got involved during the preparation of explosives. We wanted to place two bombs to blow up consecutively. I suggested to have the second bomb go off 5 or 6 minutes after the first bomb so that those who get killed in it would be members of the army and secret service, but it did not explode. They diffused it 20 seconds before it exploded.”

Rasmieh Odeh, who was also interviewed for the documentary, claims she was tortured after her arrest. Describing one particular incident, she said: “This increases my hatred against those who were responsible. Why? I am not the person responsible, the occupation is.”

After 10 years in prison and one failed escape attempt, Odeh was released and transferred to Lebanon as part of a prisoner swap, the indictment says.

Health and Human Services Sec. Kathleen Sebelius acknowledged Wednesday that it would be possible for a convicted felon to become an Obamacare navigator — one of the workers responsible for helping people deal with the ins and outs of the healthcare law.

Obama hosted an event at the White House to unveil his new racist plan based on a US citizens skin...