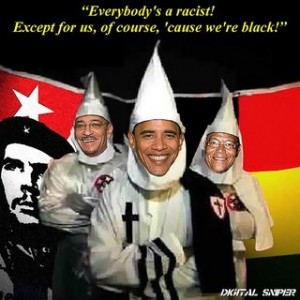 Obama hosted an event at the White House to unveil his new racist plan based on a US citizens skin color, it called the “My Brother’s Keeper” initiative, to make sure that only young man of color will have government help, young white men need not apply. Under Obama we are not US citizens, but Black people, Latino people, Asian people and White people.

Obama just seems to be unable to see past race and continues on the racial divisions within his presidency,  Obama  should rather focus on poverty instead of just race and ethnicity.  “Children of color” seem to be performing quite well when they come from highly educated, stable, middle class families.  White children in poor households have been preforming just as bad as the “man of color” as Obama says, but because they happen to be white that’s enough reason for Obama to deny them any help.

Obama even went to mention Trevon Martin, even after George Zimmerman was found to be innocent and acting in self defense not only at first by the police, also later by jurors after a witch hunt like trial conducted in Florida last year after pressure from race baiters like Obama demanded a trial.

Does congress have any say in this racist policy, of course not Obama has vowed to use his “pen and phone” to go around congress and the citizens they represent to forward his agenda .  Race baitors like Al Sharpton have publicly backed Obama’s race favoring agenda 100%.

Consider that the federal government already spends more than $14 billion a year on Title I grants, which are meant to boost the achievement of disadvantaged students. Despite all of that spending, achievement gaps have barely narrowed since the 1980s.

The unemployment rate under Obama has worsened for African-American men over the age of 20 were 12 percent, compared with 5.4 percent rest of Americans.

If Obama truly wants to be a brother’s keeper that includes speaking truth, not more lies.  A child growing up watching their mothers abort babies, teach them emotionalism, flood their brains with lyrics glorifying sodomy, drugs and the love of money etc. These are issues which defile a man. These are which see them sitting in prison, in poverty and without opportunity. These are which keep men of all color in the same ship.  If Obama was truly his brother’s keeper, he’d speak the truth to them.

Almost all of the largest Fortune 500 corporations have affirmative action and diversity programs that discriminate against white people in hiring. They also have programs of discrimination that favor non-whites in promotions and advancements. Obama ignored the fact that blacks are often overrepresented at a rate much higher than the 13% of the population they comprise in the U.S.

The Washington Times ran an expose on the racial makeup of the capital’s more than 3,000 public transportation bus and rail drivers for northern Virginia, D.C. and Maryland. 97% of the bus and train operators at the Washington Metropolitan Area Transit Authority [Metro] are black,” wrote The Times, although blacks comprise only 28% of D.C.’s metropolitan area.

Citing several examples of discrimination, the article noted: “a white male engineer near completion of a Ph.D. was passed over for a management position in favor of a black man who was barely literate.

In another typical examples, court and Metro records show, a black man who spent eight years in prison for dealing PCP was promoted to a high level management position soon after his release, and whites in the same positions as blacks with far less seniority are inexplicably paid less.”

And these are not low paying jobs, explained The Times. “The average Metro worker had a $60,000 salary, which rises to $69,000 including overtime. That is more than 71% of area residents who had an income in 2010, including 62% of whites, census records show.”

Blacks are also favored over whites in the 11 million government jobs including he U.S. Post Office, which has been called “a work program for blacks.” They make up over 20% of postal employees, according to a statement from Mack Julion, president of the Chicago branch of the National Association of Letter Carriers.Incredibly, it’s estimated blacks make up almost 80% of mailmen in Chicago, Obama’s hometown.

It is also well documented that blacks are admitted even to Ivy League universities such as Harvard, with much lower SAT scores than whites. The primary admission test today is called the Scholastic Assessment Test, or SAT. The typical score for students entering the nation’s most select colleges such as Harvard, Princeton and CalTech is 750 or above on both the math and verbal SAT.

Meanwhile, whites, who make up 65% of the United States population and tested on average 310 points higher than blacks on their SAT scores, only made up 44% of the admissions.

This is still not enough for the racist Obama, want to know if you qualify for Assistance under Obama his new My Brother’s Keeper plan, simply all you have to so is look at your arm and the color of your skin and this is how Obama will decide if you qualify for this new program or not.

In Case You Missed It:  EXCLUSIVE: A View from Behind the Stage at Last Night’s HUGE Trump Rally in Wisconsin
Posted in Tyranny and tagged Obama, Racism, White House.