Pictures are now available to two Iranian nationals that boarded the missing Malaysian flight. A fresh report has emerged claiming that the pair were in fact Iranian nationals. A BBC Persian report quotes an Iranian friend of one of the men, who said he hosted the pair in Kuala Lumpur after they arrived from Tehran in the days preceding their flight to Beijing. 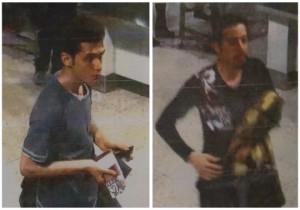 An editor at BBC Persian told The Telegraph that the two Iranians were “looking for a place to settle”.Both Malaysia and neighbouring Thailand, where the passports were originally stolen, host large and established Iranian communities.

Malaysian authorities have previously said flight MH370 disappeared about an hour after it took off from Kuala Lumpur for the Chinese capital Beijing.

“It changed course after Kota Bharu and took a lower altitude. It made it into the Malacca Strait,” the senior military officer, who has been briefed on investigations, told Reuters.

That would appear to rule out sudden catastrophic mechanical failure, as it would mean the plane flew around 500 km (350 miles) at least after its last contact with air traffic control, although its transponder and other tracking systems were off.

A non-military source familiar with the investigations said the report was one of several theories and was being checked.

Malaysia’s Berita Harian newspaper quoted air force chief Rodzali Daud as saying the plane was last detected at 2.40 a.m. by military radar near the island of Pulau Perak at the northern end of the Strait of Malacca. It was flying about 1,000 meters lower than its previous altitude, he was quoted as saying.

There was no word on what happened to the plane thereafter.

It would however still be visible to primary radar, which is used by militaries.

We are looking at all possibilities,” Malaysian police chief Khalid Abu Bakar told a news conference. We are looking very closely at the video footage taken at the KLIA (Kuala Lumpur International Airport), we are studying the behavioral pattern of all the passengers.

The Boeing 777 has one of the best safety records of any commercial aircraft in service. Its only previous fatal crash came on July 6 last year when Asiana Airlines Flight 214 struck a seawall on landing in San Francisco, killing three people. 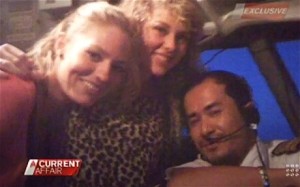 Malaysia Airlines says it is investigating an Australia television report that the co-pilot on its missing flight had invited two women to stay in the cockpit for a flight two years ago.

Jonti Roos described the encounter on the program “A Current Affair.” It aired multiple still photographs from Roos that showed the women inside the cockpit and the pilots apparently working the plane’s controls.

The airline said it wouldn’t comment about the report until its investigation into it is complete.
Roos said Fariq Abdul Hamid and the second pilot talked to her and her friend in the cockpit during the entire flight in December 2011 from Phuket, Thailand, to Kuala Lumpur.