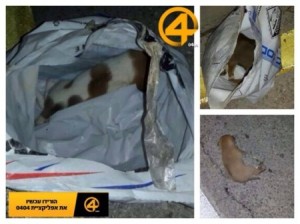 This is a horrifying and disgusting story. Animal abuse is routine in the Muslim world and dogs are particularly hated because Mohammed had ordered them killed. Muslim taxi drivers in the West refuse to transport blind people accompanied by seeing eye dogs because they believe dogs make them impure.

Arab residents of Abu Dis Arab threw four puppies at a border police patrol, causing them deaths A heartbreaking action near the separation barrier in Abu Dis, East of Jerusalem. Arabs threw four bags with live puppies from behind the high walls at a border police patrol while on activity. The stunned police were still able hear the puppies whimpering. They opened the bags and found three puppies had died on the spot, and another puppy dying. The cub was transferred immediately to a vet, but died a short time later. The policemen were horrified by the brutality against the pups, and the talk of the day amongst their company dealt with the incident. These are exclusive images of the puppies in the bags, and after they removed the dead puppies.

The source for this post is the “0404 News“, an internet based outlet that report predominantly about Jerusalem, Judea and Samaria, IDF. More often than not, they are tipped directly by IDF and Police personnel about items, especially items that do not gain media attention, like rock throwing, firebombs, and other attacks on armed forces and civilians, often accompanied with private photos taken with their cellular phones. While I personally do not doubt the veracity of this report, it should be stated that as of now, no other news outlets or Facebook page in Arabic reported it. Judge Dan

Islam believes that “Prayer is annulled by a dog, a donkey and a woman (if they pass in front of the praying people).”

As a result, Muslims abuse women and dogs.

When Donald Rumsfeld visited Iraq, Saddam gave him a gruesome video as a “gift”.

“Saddam had given me a three-minute videotape… The blurred, choppy footage shows young Syrians biting the heads off of snakes and stabbing puppies, to the apparent applause of then-Syrian dictator Hafez al-Assad.”

I wrote about Islamic Dogophobia in the past.

In Iran, visitors tell of dogs who could distinguish between Zoroastrians and Muslims; “In Sharifabad the dogs distinguished clearly between Moslem and Zoroastrian, and were prepared to go…full of hope, into a crowded Zoroastrian assembly, or to fall asleep trustfully in a Zoroastrian lane, but would flee as before Satan from a group of Moslem boys.”

In Afghanistan, dogs know to escape their “cultural problem” by taking refuge with Western soldiers. In Kandahar, former home of Osama bin Laden, one dog was beaten by a crowd, stabbed in the chest, had his ears cut off and thrown under a car– until he was rescued by British and Aussie soldiers.

The article states that many of the locals “despise dogs only marginally less than they do coalition soldiers”, but that dog’s “refusal to submit became legendary” around the base. There is something to be learned from a creature who refuses to submit to the violence of a creed that calls for his death. A Muslim is literally one who submits and a Dhimmi is one who submits to a Muslim. We who do not bow to Allah or to Muslims can learn from the resilience of a simple animal in the face of evil.

AFP reports: The European Union and UNICEF launched a project Thursday to build a desalination plant in the Gaza Strip to...