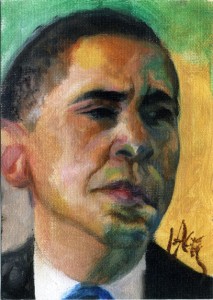 As you ponder your potential moves regarding President Vladimir V. Putin’s annexation of Crimea (a large majority of its 2 million people are ethnic Russians), it is important to remember that whatever moral leverage you may have had in the court of world opinion has been sacrificed by the precedents set by previous American presidents who did not do what you say Mr. Putin should do – obey international law.

The need to abide by international law is your recent recurring refrain, often used in an accusatory context toward Mr. Putin’s military entry in Crimea and its subsequent annexation, following a referendum in which Crimean voters overwhelmingly endorsed rejoining Russia. True, most Ukrainians and ethnic Tatars boycotted the referendum and there were obstacles to free speech. But even the fairest of referendums, under UN auspices, would have produced majority support for Russia’s annexation.

Every day, presidential actions by you violate international law because they infringe upon national sovereignties with deadly drones, flyovers and secret forays by soldiers – to name the most obvious.

President Bush’s criminal invasion and devastation of Iraq in 2003 violated international law and treaties initiated and signed by the United States (such as the Geneva Conventions and the UN Charter). What about your executive branch’s war on Libya, now still in chaos, which was neither constitutionally declared, nor authorized by Congressional appropriations?

“Do as I say, not as I do,” is hard to sell to Russians who are interpreting your words of protest as disingenuous. This is especially the case because Crimea, long under the rule of the Ottoman Empire, became part of Russia over 200 years ago. In 1954, Soviet leader, Nikita Khrushchev gave Crimea to Ukraine, which was then part of the Soviet Union, out of sympathy for what Ukraine endured under the Nazi invasion and its atrocities. It mattered little then because both “socialist republics,” Ukraine and Crimea, were part of the Soviet Union. However, it is not entirely clear whether Khrushchev fully complied with the Soviet constitution when he transferred Crimea to Ukraine.

Compare, by the way, the United States’ seizure of Guantanamo from Cuba initially after the Spanish-American War, which was then retained after Cuba became independent over a century ago.

The Russians have their own troubles, of course, but they do have a legitimate complaint and fear about the United States’ actions following the collapse of the Soviet Union. Led by President William Jefferson Clinton, the United States pushed for the expansion of the military alliance NATO to include the newly independent Eastern European countries. This was partly a business deal to get these countries to buy United States fighter aircrafts from Lockheed Martin and partly a needless provocation of a transformed adversary trying to get back on its feet.

As a student of Russian history and language at Princeton, I learned about the deep sensitivity of the Russian people regarding the insecurity of their Western Front. Hitler’s attack on the Soviet Union took many millions of Russian lives. The prolonged Nazi siege of the city of Leningrad alone is estimated to have cost over 700,000 civilian lives, which is about twice the total number of United States soldiers killed in World War II.

The memories of that mass slaughter and destruction, and of other massacres and valiant resistance are etched deeply in Russian minds. The NATO provocation was only one of the West’s arrogant treatments of post-Soviet Russia, pointed out in the writings of Russian specialist, NYU professor Stephen Cohen (see his pieces in The Nation here:http://www.thenation.com/authors/stephen-f-cohen). That sense of disrespect, coupled with the toppling of the elected pro-Russian President of Ukraine in February, 2014 (which was not lawful despite his poor record) is why Mr. Putin’s absorption of Crimea and his history-evoking speech before the Parliament, was met with massive support in Russia even by many of those who have good reasons to not like his authoritarian government.

Now, you are facing the question of how far to go with sanctions against the Russian government, its economy and its ruling class. Welcome to globalization.

Russia is tightly intertwined with the European Union, as a seller and buyer of goods, services and assets, and to a lesser but significant degree with the United States government and its giant corporations such as oil and technology companies. Sanctions can boomerang, which would be far worse than just being completely ineffective in reversing the Russian annexation of Crimea.

As for sanctions deterring any unlikely future Russian moves westward into Ukraine, consider the following role reversal. If Russia moved for sanctions against the United States before Afghanistan, Iraq, Libya, Yemen and other attacks, would that have deterred either you or George W. Bush from taking such actions? Of course not. Such an outcome, politically and domestically, would not be possible.

If you want continued Russian cooperation, as you do, on the critical Iranian and Syrian negotiations, ignore the belligerent baying pack of neocons who always want more United States wars, which they and their adult children avoid fighting themselves. Develop a coalition of economic support for Ukraine, with European nations, based on observable reforms of that troubled government. Sponsor a global conference on how to enforce international law as early as possible.

Drop the nonsense of evicting Russia from the G8 – a get-together forum of leaders. Get on with having the United States comply with international law, and our constitution on the way to ending the American Empire’s interventions worldwide, as has been recommended by both liberal and conservative/libertarian lawmakers, along with much public opinion.

Concentrate on America, President Obama, whose long unmet necessities cry out from “sea to shining sea.”

In Case You Missed It:  Watch: ‘Libs of TikTok’ Unveils Her Identity, Reveals Secret Offer from DeSantis
Posted in Tyranny and tagged Obama, White House.

On July 8, 2013, the pro-PRC Chinese-language newspaper, Wenweipo, published an article titled “50 (Six Wars China Is Sure to Fight In the...