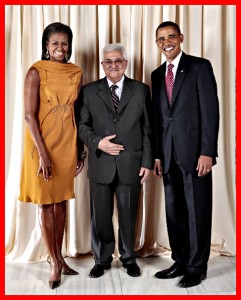 Specifically, the report said, Abbas rejected Prime Minister Benjamin Netanyahu’s demand that he recognize Israel as a Jewish state. He also refused to abandon the Palestinian demand for a “right of return” for millions of Palestinians and their descendants — a demand that, if implemented, would drastically alter Israel’s demographic balance and which no conceivable Israeli government would accept. And finally, he refused to commit to an “end of conflict,” under which a peace deal would represent the termination of any further Palestinian demands of Israel.

More in The Times of Israel and comment and opinion below.

Israel and the Palestinians

Abbas is now hoping to turn himself into a hero by telling his people that he had the guts to say no to Obama and Kerry during his visit to Washington.

Abbas is badly in need of public support, especially in light of increased tensions inside his ruling Fatah faction. In the past few days, these tensions have erupted into an all-out confrontation between Abbas and ousted Fatah Central Committee member Mohamed Dahlan. …

Abbas’s rejection of the U.S. proposals is also attributed to the severe crisis within Fatah.

If in the past Abbas was afraid of Hamas’s response to the signing of a peace agreement with Israel, it is now clear that he also has good reason to fear the reaction of top Fatah officials to any move he makes concerning the peace process.

All Abbas can do for now is continue to ask his public servants and schoolchildren to take to the streets and chant slogans in his support. These rallies are intended to send a message not only to Obama and Kerry, but also to Abbas’s rivals in Fatah.

The US has unmasked the real Palestinian positions. US efforts to pin down a framework have also exposed the deep fissures within Fatah and among Palestinians at large. In this context, the Palestinian strategy will likely lead them back to the unilateralism they pursued at the United Nations in 2011.

However, it failed to bring the Palestinians closer to a viable sovereign independent nation state. The implications are severe. Recently the European donor states have expressed impatience with Palestinian refusals and have threatened to curtail financial assistance to the PA .

Palestinian rejection of the current US framework paper may signal the end of the Palestinian statehood project in parts of Judea and Samaria/ West Bank and Gaza for the foreseeable future.

The Israeli Foreign Ministry has now declared a full-blown strike. Among the casualties is Benjamin Netanyahu’s trip to Latin America while no Israeli diplomats will be present at the  UN Human Rights Council, which is planning to launch a massive attack on the Jewish state next week in a series of five resolutions that — expressly citing controversial UN official Richard Falk — include new accusations of racism, along with calls to impose “international criminal liability” on businesses with indirect links amounting to “corporate complicity in breaches of international law related to illegal settlements.”

The Wall St. Journal criticizes John Kerry for not making demands on the Palestinians in the same way he is doing to Israel and addresses the Jewish state issue:

As to why Mr. Abbas won’t accept a Jewish state, it’s because doing so means relinquishing what Palestinians call the “right of return.” This is the claim that millions of descendants of Arab refugees from Israel’s war of independence are entitled to return to their ancestral homes in Israel proper. Such a right is recognized for no other refugee group in the world, least of all the roughly 800,000 Jews evicted from Arab lands. For Israel to accept it would risk a demographic time bomb that could turn the country into another Lebanon, sectarian and bloody.

Anyone paying attention to Palestinian politics understands that the right of return, with its implicit promise to eliminate Israel, is the centerpiece of the conflict. The idea that Israel’s settlements are the problem should have been discredited for good after Israel dismantled its settlements in Gaza in 2005 only to get more war, not less.

Mr. Kerry would perform a public service by pointing out these simple truths, while also gaining credibility with a skeptical Israeli public. That he hasn’t done so helps explain why his diplomacy is failing.

Meanwhile, J Street has endorsed the Palestinian refusal to recognize Israel as a Jewish state.

The New York Times finally discovers that Palestinian sources may be unreliable:

In the two weeks since Mr. Abbas’s opening salvo against Mr. Dahlan, who is living abroad, the Arabic media has been filled with unproved accusations by Mr. Abbas about the long-ago killings of prominent Palestinians, and by both men about collaboration with Israel and financial corruption. Mr. Abbas even implied that Mr. Dahlan might have had a hand in the mysterious death of Yasir Arafat, the father of the Palestinian cause, in 2004. For the most part, the two camps have not offered detailed responses to all the accusations.

In Case You Missed It:  Democrats Are Hoping Kamala Harris Can Help Them Get Out The Vote In 2022 Midterms
Posted in Israel, Terrorism, Tyranny and tagged Gaza, HonestReporting, Islam, Israel, Jihad, Judea and Samaria, Obama, Palestinians, Terrorism.

A Ukrainian ultra-nationalist leader was shot dead on Tuesday, in what officials describe as a special forces operation. Oleksandr Muzychko,...