A Ukrainian ultra-nationalist leader was shot dead on Tuesday, in what officials describe as a special forces operation. 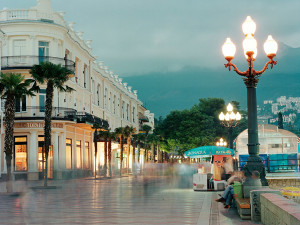 Oleksandr Muzychko, better known as Sashko Bily, died in a shoot-out with police in a cafe in Rivne in western Ukraine, the interior ministry said, according to the BBC.

He was a leader of Right Sector, a far-right group which was prominent in the recent anti-government protests.

Ukraine’s Deputy Interior Minister Vladimir Yevdokimov said Muzychko died after opening fire at police and Sokol special forces, who had raided a cafe to arrest him and fellow ultra-nationalists.

During the raid, Muzychko fired at police as he was trying to flee, wounding one of them. Police then returned fire and captured him and three others in his “criminal gang”, Yevdokimov said, according to the BBC.

“He was still alive as they were arresting him – but then the paramedics, called to the scene, found that he had died,” said Yevdokimov. The three arrested gang members have been taken to Kiev for questioning.

A Right Sector organizer in Rivne has threatened revenge for the killing of Muzychko, saying he had not been summoned by investigators.

“We will avenge ourselves on [Interior Minister] Arsen Avakov for the death of our brother. The shooting of Sashko Bily is a contract killing ordered by the minister,” Roman Koval of the Right Sector in Rivne region said, according to the BBC.

Earlier, a Ukrainian MP, Oles Doniy, gave a different version of events. He said two cars had forced Muzychko’s car to stop, and he had then been dragged into one of the other cars. Later his body was found dumped, his hands tied behind his back and two bullet wounds in his heart, Doniy wrote overnight on his Facebook page.

Correspondents say Muzychko acquired notoriety in Ukraine after he was filmed brandishing an AK-47 assault rifle at a town hall session in western Ukraine, and then harassing a local prosecutor. After that, in February, the Ukrainian interior minister condemned his behavior and promised to investigate.

Moscow says the activities of Right Sector and other Ukrainian nationalist groups pose a threat to the large Russian-speaking minority in Ukraine. President Vladimir Putin gave that as one of his reasons for intervening in Crimea.

Meanwhile, the backlash against Russia for its annexing Crimea has continued.

On Monday, Russia was suspended from the G8 group of leading nations, a direct response from major countries allied against Russia’s annexation of Crimea.

Russia was not concerned by the move, as Lavrov said that being kicked out of G8 would be no big deal.

Putin has been thumbing his nose at EU and U.S. sanctions, and has even drafted his own sanctions on top American senators.

In Case You Missed It:  Media absurdly insists COVID shots are “safe and effective” as vaccine injuries and deaths mount
Posted in Freedoms and tagged Freedom, Russia, Ukraine.

Just 15 years ago, on March 24, NATO began its 78-day bombing of Yugoslavia. The alliance bypassed the UN under...