The UN General Assembly on Thursday approved a resolution calling the Crimean referendum to secede from Ukraine invalid. 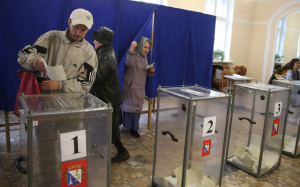 The vote on the non-binding resolution was 100-11, with 58 countries abstaining, reported CNN.

The vote is the latest indication of Russia’s isolation within the international community over its actions in Ukraine.

Moscow formally annexed Ukraine’s southern Crimea region last week, days after the controversial referendum in which a majority of Crimeans voted to leave Ukraine for Russia.

As the resolution at the General Assembly is non-binding, Russia is likely to remain unfazed by it, just as it has ignored the sanctions that have been imposed on it by the United States and the European Union.

Russia has already vetoed a Security Council resolution which urged countries not to recognize the results of the referendum in Crimea and which would have been binding if passed.

Meanwhile, two U.S. officials told CNN on Thursday that Russia now may have as many as 40,000 troops near its border with Ukraine. The officials said that this estimate was largely based on satellite imagery and that a firm number is difficult to assess.

However, a spokesman for Ukraine’s Council of National Security and Defense told CNN his government estimates 88,000 Russian troops are at the Ukrainian border.

“Yes, I am planning to run,” she said at a news conference at her Kiev office, according to CNN, adding that she intended to ask delegates at her Batkivshchyna Party congress on Saturday to nominate her as a presidential candidate.

Another candidate for the presidency is Vadim Rabinovich, president of the All-Ukrainian Jewish Congress, who announced his candidacy on Tuesday.

Rabinovich explained that he was running to “destroy the myth about anti-Semitism in Ukraine.”

In Case You Missed It:  Dr. Scott Lively talks Afghanistan and why Americans should be worried in his new show on Brighteon.TV
Posted in Freedoms and tagged Election, Freedom, Military, Russia, Ukraine, United Nations.

Yesterday, the House of Representatives passed H.R. 4302, a bill preventing a 24 percent cut in what physicians are paid...