Ken Ham, who recently debated Bill Nye, says that the new blockbuster, starring Russell Crowe, is an insult to Christians: “Ultimately, there is barely a hint of biblical fidelity in this film. It is an unbiblical, pagan film from its start” 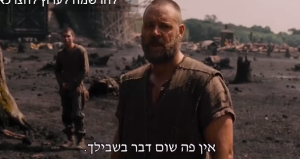 As a Creationist and also a believer in the historical account of Noah and the Flood, I agree with atheist Darren Aronofsky’s statement about his just-released film “Noah”: It is the “least biblical” of Bible-themed films. Any other agreement I have with the filmmaker’s take on the book of Genesis and its account of Noah ends right there. Further, I told a group of pastors earlier today that because I found “Noah” to be a boring 2½ hour movie, it may be the worst film I’ve ever seen.

Except for some of the names in the movie, like Noah, his sons’ names, and Methuselah, hardly any remnant of the Bible’s account of the Flood in Genesis 6-9 is recognizable. Yes, there is an Ark in the film that is true to the massive biblical proportions, but it did not look like a seaworthy vessel. There were many animals that came to Noah and went on board the Ark, but there were far too many creatures crammed inside and certainly many more than were needed. Also, while the extreme wickedness of man was depicted, the real sin displayed in the film was the people’s destruction of the earth. Lost within the film’s extreme environmentalist message is that the actual sins of the pre-Flood people were a rebellion against God and also man’s inhumanity to man.

Noah’s misanthropy is revealed many times in the film. For example, when the girlfriend of Noah’s son Ham is caught in a trap and is about to be overtaken by some marauders, Noah leaves the girl to die at their hands. The film’s Noah wants to totally destroy the human race and doesn’t want his sons to have children. In perhaps the most shocking part of the film, Noah plans to kill his unborn grandchild, the child of Shem’s wife, if it is a girl. As Noah values his animals on board more than people and rants about it, he becomes a psychopath. Hollywood’s Noah is not the righteous man described in Hebrews 11 and other scriptures.

Even putting aside the movie’s scene that presents evolution’s alleged progression of simple animals to humans, I noted pagan elements in “Noah.” His grandfather Methuselah is something of a witch doctor. In addition, Noah gets the idea of building the Ark after drinking a magical potion.

Ultimately, there is barely a hint of biblical fidelity in this film. It is an unbiblical, pagan film from its start. It opens with: “In the beginning there was nothing.” The Bible opens with, “In the beginning God.” That difference helps sum up the problem I have with the film. The Bible is about the true God of creation; the movie does not present the true God of the Bible.

It is hard to fathom why some Christian leaders have recommended this movie. Some of them argue that it can be used for evangelistic purposes. However, because the film grossly distorts the Genesis account of the Creation and the Flood, and it totally denigrates the godly character of the Noah of the Bible. In good conscience, we can’t encourage this strategy of evangelism.

Now, if a Christian who is knowledgeable about the true account of Noah knows of someone who has already seen the film, then that believer should certainly take the opportunity to share about the truthfulness of God’s Word — including the forgiveness offered in Jesus Christ, our modern-day Ark of salvation. But, in the end, the movie is so anti-biblical that it will do more harm than good in relation to the Christian faith and the Word of God.

There will be many people who will choose to see this movie. We can’t prevent that, and I am not calling for a boycott. But we have an obligation to send out a warning, and in so doing also to communicate biblical truths and undo the possible damage that might be caused by this sci-fi fantasy — one that is making a mockery of the Word of God and its true account of Noah, the Flood, and the Ark.

While the Bible’s account of the Flood is one of judgment, it is also one about mercy and salvation. Likewise, our future full-size evangelistic Noah’s Ark will honor the Bible as God’s Word and not treat it as a pagan fable.

Posted in Financial and tagged Liberalism.

The Observatory on Intolerance and Discrimination against Christians has reported that homosexual activists in Germany attacked parents who were protesting...