More details are emerging about what was presented at the “White Privilege Conference” held in Madison, Wisconsin, where tax money was spent to train teachers how to annihilate “white privilege” and “white supremacy” in American schools. One session insisted that whites can never be cured of their permanent racist attitudes. 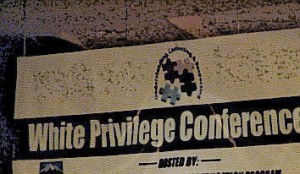 Breitbart News  reported on the conference, now in its fifteenth year. Over these years, teachers have been told that whites have been pushing “white supremacy” on kids since the country was created, and that whites are so infused with racism that they aren’t even cognizant of their crimes.

The latest conference pushing this racist propaganda was held in Madison between March 25 and 29. A Wisconsin reporter tried to gain access to the event, but hosts denied him entrance.

However, another reporter was able to gain access without being discovered. Nick Novak of Wisconsin’s MacIver Institute attended the event and found in one session that teachers were being brainwashed that white people are like “alcoholics” with their racism. They will never be cured of it but will always be racists at heart.

Kim Radersma, a former high school English teacher in California and Colorado, was the leader of a breakout session entitled “Stories from the Front Lines of Education: Confessions of a White, High School English Teacher.” During the session, she told the teachers and administrators that “being a white person who does anti-racist work is like being an alcoholic.” She went on to say, “I will never be recovered by my alcoholism, to use the metaphor. I have to everyday [sic] wake up and acknowledge that I am so deeply imbedded with racist thoughts and notions and actions in my body that I have to choose everyday [sic] to do anti-racist work and think in an anti-racist way.”

Radersma, who is working toward her Ph. D. in critical whiteness studies at Brock University in Ontario, Canada, also trained the attendees to think that all education should be taught with a political agenda.

“If you don’t want to work for equality, get the fuck out of education,” she said. “If you are not serious about being an agent of change that helps stifle the oppressive systems, go find another job. Because you are a political figure.”

This runs contrary to the excuse that event organizers gave Wisconsin reporter Adam Tobias as a reason to bar him from the event. Tobias was told that the event was “private” and not funded by tax dollars. Therefore, it was not a public, political event open to reporters, they said.

The event was held at the Monona Terrace Community and Convention Center and was provided with an $18,375 booking event assistance payment, money that came from a fund drawn from local hotel room tax revenue.

Furthermore, some of the workshops sponsored by this year’s White Privilege Conference are quite political. The event offered such workshops as “Against the Tea Party Movement,” “If You Build It, They Will Come: Developing a Pre K-12 Curricular Scope and Sequence for Whiteness and Anti-Racism,” and “Climate-Change-Mind-Set: Replacing White Liberalism with Racial Justice as Our Communities Organize in Response to Climate Change.”

The answer to racism isn’t racism, besides from where I sit every advantage and privilege has been granted to blacks and now every other minority (except Asians). Whites are being thrown to the curb at every opportunity and I don’t say that as a racial thing but as an observation. Programs such as “civil-rights (for some)” laws, “affirmative action”, “contract set-asides and wavers”, giving certain minorities a “leg up” in promotions and advancement despite lower test scores are just a few of the ways that whites have “bent over backwards” to insure “fairness”.

The morons in Wisconsin are doing all three shamelessly.

In Case You Missed It:  COVID IS JUST THE EXCUSE: Governments to demand constant surveillance of your blood, body fluids and medication compliance
Posted in Freedoms and tagged Democrats, Liberal Fascism, Liberalism, Racism.

4 out of 5 Obamacare Sign-ups Require Subsidies

The CEO of the Cleveland Clinic says that a majority of Americans who signed up for Obamacare have seen their premiums rise....