Filmmakers Phelim McAleer and Ann McElhinney have been speaking out against media and Hollywood bias in efforts to fund their new movie project, Gosnell. 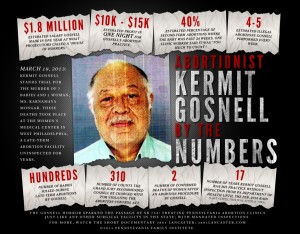 McAleer and McElhinney, along with journalist Magdalena Segieda, launched a crowd-sourcing campaign through Indiegogo to produce Gosnell, which Hollywood Reporter said, “unlike FrackNation and other movies McAleer has produced, will be a scripted drama, and be based largely on grand jury testimony and documentation from Gosnell’s trial, which major media outlets covered sporadically.”

The Washington Examiner reported that Ann McElhinney, Mr. McAleer’s wife and co-filmmaker said, “Hollywood and the mainstream media have been very reluctant to cover this serial killer but we think it’s time Gosnell’s story was told.” In response, they have decided to use their company, Hat Tip Films, to make the movie.

Hap Tip Films used Kickstarter to fund their previous documentary, FrackNation, but were forced to switch to Indiegogo when “Kickstarter imposed censorship restrictions on how the moviemakers planned to describe the killer in their campaign.”

McAleer compares the pushback he’s met with to produce this film with similar projects, “The Jodi Arias trial ended at the same time as Gosnell and a film was on TV within nine months. The L.A.-based serial killer the Grim Sleeper has just had a movie on Lifetime and he has not been convicted yet. You’re more likely to find Hollywood executives at a fundraiser for Planned Parenthood than trawling the media for stories such as Kermit Gosnell.”

“Gosnell killed more people then Gary Ridgway…the Zodiac Killer, and Ted Bundy, combined. In a thirty-year killing spree it is thought he killed many thousands of babies,” McElhinney comments in the promotional video.

As the Obamacare enrollment period draws to a tentative close – and you never know when the period will close,...