The 4.8 tremblor on Sunday was the strongest in the National Park since 1985, and the epicenter was almost in the middle of the park near the Norris Geyser Basin. 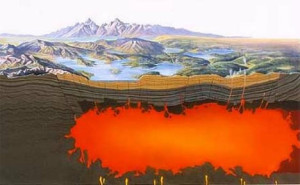 Robert B. Smith, a seismologist and professor of geophysics at the University of Utah has been monitoring Yellowstone for years. He said:

“Our best evidence is that the crustal magma chamber is filling with molten rock, but we have no idea how long this process goes on before there either is an eruption or the inflow of molten rock stops and the caldera deflates again,”

It’s known that there are often earthquakes in the immediate vicinity of a volcano before an eruption. As a supervolcano, a full scale eruption at Yellowstone would be a global nightmare.

600,000 years ago, Yellowstone super volcano erupted, ejecting 240 cubic miles (1000 cubic km) of ash and lava into the atmosphere. This would have been enough to cover a large city to a depth of more than a mile. (source)

The University of Utah team found that the magma chamber is some 55 miles long, and it contains up to 600 cubic kilometers of molten rock. If even a third of that volume erupted at Yellowstone we would be facing a global disaster.

“We’ve been working there for a long time, and we’ve always thought it would be bigger… but this finding is astounding.”

“We record earthquakes in and around Yellowstone, and we measure the seismic waves as they travel through the ground. The waves travel slower through hot and partially molten material… with this, we can measure what’s beneath.”

“To our knowledge there has been nothing mapped of that size before.” (source)

What the team found has left them stunned. The magma chamber is huge, reaching depths of 1 to 9 miles. Add to that their estimates of its length and width and it becomes something with the potential to be a “continent killer”.

Earthquakes are constant within the park but a rise in frequency or intensity is often a precursor of an impending eruption.

One day Yellowstone will blow, and the global effects will be devastating. Tambora, a still active volcano in Indonesia, exploded in 1815 spewing out an estimated 160 cubic kilometers of ejecta. The eruption threw so much debris into the atmosphere that 1816 became known as “the year without a summer”. Crops suffered from the unseasonably cold weather and famine conditions set in. It’s estimated that 80,000 people died from the effects of the Tambora eruption. That’s in addition to the 10,000 who died on the island at the time of the explosion.

Yellowstone is many times larger than Tambora, and the world is far more highly populated than it was in 1816. The 90,000 deaths from the Tambora eruption would appear insignificant if Yellowstone blew.

The nearest thing in size we have to compare with Yellowstone is the Mount Toba eruption some 74,000 years ago. Toba left a crater larger than the City of London in an eruption 10,000 times larger than Mount St. Helens. (source)

Thick ash deposits would cover a large proportion of North America and the volcanic gases and ash thrown into the air would affect our climate for years. When Yellowstone blows, we won’t just be facing one year without a summer, we will be facing many.

The global drop in temperatures, should this happen today, would mean starvation for hundreds of millions due to crop failure. Acidification of the oceans would kill off the only source of protein for tens of millions more. (source)

A supervolcanic eruption is a catastrophe that will happen one day, which day remains to be seen.

In Case You Missed It:  Moderna Says People Who Received its Covid Vaccine Early On Are TWICE as Likely to Get ‘Breakthrough’ Infection – Pushes Booster Shot
Posted in Freedoms and tagged United Socialist States of America.

The USA becomes the USSR