In his Kremlin defense of Russia’s annexation of Crimea, Vladimir Putin, even before he began listing the battles where Russian blood had been shed on Crimean soil, spoke of an older deeper bond. 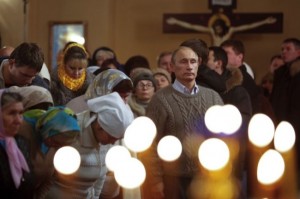 Crimea, said Putin, “is the location of ancient Khersones, where Prince Vladimir was baptized. His spiritual feat of adopting Orthodoxy predetermined the overall basis of the culture, civilization and human values that unite the peoples of Russia, Ukraine and Belarus.”

Russia is a Christian country, Putin was saying.

This speech recalls last December’s address where the former KGB chief spoke of Russia as standing against a decadent West:

“Many Euro-Atlantic countries have moved away from their roots, including Christian values. Policies are being pursued that place on the same level a multi-child family and a same-sex partnership, a faith in God and a belief in Satan. This is the path to degradation.”

Indicting the “Bolsheviks” who gave away Crimea to Ukraine, Putin declared, “May God judge them.”

What is going on here?

With Marxism-Leninism a dead faith, Putin is saying the new ideological struggle is between a debauched West led by the United States and a traditionalist world Russia would be proud to lead.

In the new war of beliefs, Putin is saying, it is Russia that is on God’s side. The West is Gomorrah.

Western leaders who compare Putin’s annexation of Crimea to Hitler’s Anschluss with Austria, who dismiss him as a “KGB thug,” who call him “the alleged thief, liar and murderer who rules Russia,” as the Wall Street Journal’s Holman Jenkins did, believe Putin’s claim to stand on higher moral ground is beyond blasphemous.

But Vladimir Putin knows exactly what he is doing, and his new claim has a venerable lineage. The ex-Communist Whittaker Chambers who exposed Alger Hiss as a Soviet spy, was, at the time of his death in 1964, writing a book on “The Third Rome.” 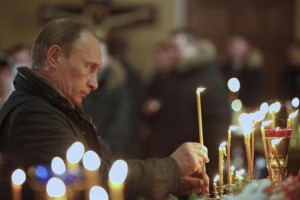 The first Rome was the Holy City and seat of Christianity that fell to Odoacer and his barbarians in 476 A.D. The second Rome was Constantinople, Byzantium, (today’s Istanbul), which fell to the Turks in 1453. The successor city to Byzantium, the Third Rome, the last Rome to the old believers, was — Moscow.

Putin is entering a claim that Moscow is the Godly City of today and command post of the counter-reformation against the new paganism.

Putin is plugging into some of the modern world’s most powerful currents.

Not only in his defiance of what much of the world sees as America’s arrogant drive for global hegemony. Not only in his tribal defense of lost Russians left behind when the USSR disintegrated.

He is also tapping into the worldwide revulsion of and resistance to the sewage of a hedonistic secular and social revolution coming out of the West.

In the culture war for the future of mankind, Putin is planting Russia’s flag firmly on the side of traditional Christianity. His recent speeches carry echoes of John Paul II whose Evangelium Vitae in 1995 excoriated the West for its embrace of a “culture of death.”

What did Pope John Paul mean by moral crimes?

Washington Post columnist Anne Applebaum writes that she was stunned when in Tbilisi to hear a Georgian lawyer declare of the former pro-Western regime of Mikhail Saakashvili, “They were LGBT.”

“It was an eye-opening moment,” wrote Applebaum. Fear and loathing of the same-sex-marriage pandemic has gone global. In Paris, a million-man Moral Majority marched in angry protest.

Author Martha Gessen, who has written a book on Putin, says of his last two years, “Russia is remaking itself as the leader of the anti-Western world.”

But the war to be waged with the West is not with rockets. It is a cultural, social, moral war where Russia’s role, in Putin’s words, is to “prevent movement backward and downward, into chaotic darkness and a return to a primitive state.”

Would that be the “chaotic darkness” and “primitive state” of mankind, before the Light came into the world?

This writer was startled to read in the Jan-Feb. newsletter from the social conservative World Council of Families in Rockford, Ill., that, of the “ten best trends” in the world in 2013, number one was “Russia Emerges as Pro-Family Leader.”

“While the other super-powers march to a pagan world-view,” writes WCF’s Allan Carlson, “Russia is defending Judeo-Christian values. During the Soviet era, Western communists flocked to Moscow. This year, World Congress of Families VII will be held in Moscow, Sept. 10-12.”

Will Vladimir Putin give the keynote?

In the new ideological Cold War, whose side is God on now?

By Patrick J. Buchanan the author of “Suicide of a Superpower: Will America Survive to 2025?” To find out more about Patrick Buchanan and read features by other Creators writers and cartoonists, visit the Creators Web page at www.creators.com.

Save Kessab: Kardashian, Others Tweet Plight of Christian Armenians in Syria

Pro-regime soldiers march in Kessab, Syria. Photo: AFP/Getty Images/Newscom The “Save Kessab” campaign on Twitter and other social media has...