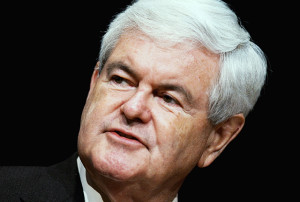 Eich had donated $1,000 in support of California’s Proposition 8, which defined marriage as between a man and a woman, in 2008.

“If you’re a young faculty member in a lot of places, if you’re a young member of a news department, and you have the wrong views, meaning conservative, you have no career,” Gingrich told ABC’s This Week today.

“This is just the most open, blatant example of the new fascism,” he added, “which says if you don’t agree with us 100 percent, we have the right to punish you, unless you’re like Hillary [Clinton] and like Barack Obama, and you recant.”

Elaine Huguenin. (Photo courtesy of Alliance Defending Freedom) They were once high principles in the pursuit of e pluribus...