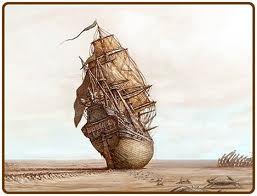 Man is a fish out of water. And because of this state of affairs, he acquires a certain pathos that underscores his predicament as an eternal being that for the moment has been tethered in time. And while one can draw a crude analogy between humanity’s habitation in the temporal present and to the “eternal now” that a timeless God has forever occupied, it seems as if for now we are metaphysical time travelers inclined with a preoccupation for either the past or future. Whether our hearts are primed for yesterday’s nostalgia or tomorrow’s longing is certainly related to our: age, temperament, understanding, animating philosophy, and the composition and character of our souls. Indeed, given these various alignments of personality that form us like moral constellations, will not our political expectancies point us to either the reclamation of a Golden Age….or to the founding of Utopias?

Both the infatuation with History as the flux of becoming and the stripping of human personality into discrete atoms of desire are the products of either Modernity or Post-Modernity, depending upon how one carves the philosophies of Man. But it is safe to say that since the Post-Enlightenment West, humanity’s perspective has slowly shifted from looking back to looking forward. The fantastic success of Science and technology has wildly succeeded in planting within our minds the beguiling paradigm that more freedom, more pleasure, and more autonomy over nature lies in store for us – and this intoxicating cocktail of the future carries with it the tacit assumption that what has been left in our wake was attenuated, inferior, or constricting. Furthermore, this philosophical revolution affected the analysis of History itself through the dogma of Historicism: the concept that injected a corrosive relativism which seeks to sever the human dialogue linking civilizations and ages.

Modernity’s dogmatic repudiation of a fixed underlying human nature ultimately succeeded in rendering history largely irrelevant. The Historicist holds that since our minds are deemed to be biochemical lumps of formless clay that are impressed upon through language, geography, philosophy, gender, time and circumstance, the compartmentalized narratives of life are now thought to be largely incommunicable between men occupying their various positions within the sea of time. And if philosophy, which is the pursuit of wisdom, cannot carry on the search for truth between the serial epochs of thought and experience, then history ultimately becomes an amalgamation of meaningless tales as philosophy itself dies – becoming instead the “History of Philosophy:” the academic exhumation of quaint thoughts and systems both sterile and arcane.

Such Historical, Moral, and Cultural Relativism not only make it impossible to tease out the lessons of history, but they also both impede the way in which we ascribe value to the virtues of the soul or in offering judgments relating to the character of history’s political regimes. We, who have been indoctrinated with the cut-rate conceits of Modernity, carry in our flattered minds the idea that since rifles are preferable to swords and the computer more reliable than the oracle, so must 21st century man’s apprehension of the first things of being overshadow the astuteness of previous ages. But do we dare affirm that contemporary homo sapien’s understanding of his human condition stands superior to a Roman of the republic or to an Englishman of the Restoration? In answering this immodest arrogance, the late Allan Bloom observed:

…Romans are not Englishmen, but real Romans, a distinct kind of men, differing from modern men in the character of their passions and their goals…This is not to say that Modernity or the fall of antiquity have changed human nature, but rather that new objects have been provided for its interest and that a new education forms it. It is precisely because human nature has not changed that the past is of interest. What men once were, we can still be.

This compartmentalization of man into philosophical and psychological isolation has had the pernicious effect of alienating him from the way the West largely understood itself before the Turning Point. Aristotle and Aquinas’ teachings of humanity inhabiting the center of an enchanted universe may have been provisionally superseded by astronomy, but such a conclusion, in truth, depends upon the perspective that one takes. To the materialist/naturalist, the cosmos’ center is unknown, and at least for now, unknowable. For the awakened theist, the transcendent grace of a Creator’s effusive love provides that divine music by which the heavenly spheres are set into motion and maintained. While this is Christianity at its most orthodox, ultimately, the materialist would be hard pressed in refuting the notion that the Hand of God sustains the universe.

But even if we admit the limitations of Aristotelian physics or geography, those ancient formulations of moral virtue or politics are quite another matter. The classical political rationalism of antiquity (a study reinvigorated by Leo Strauss and his disciples) is still the measuring rod by which we judge the character of regimes and their transformations; and fertile minds of the likes of Hobbes, Machiavelli, Montesquieu, Locke, and even our own Founders, drew their water from the twin moral-political fountains of Athens and Jerusalem. In contrast, contemporary political science has reduced the study of political theory to “the History of,” while it has severed “fact from value” in an attempt to denature Aristotle’s architectonic science of politics (the highest that rules all others) into a quasi-naturalistic empirical body of knowledge—as if the invigorating value laden study of “How men should live” could be reduced to a quantitative discipline in the manner of optics or thermodynamics.

Moreover, the fact/value split has resulted in the near eclipse of moral philosophy and has atrophied History’s conversation concerning the great political questions. The once all-inclusive Science of Politics is now reduced to the mundane quantitative analysis of voting blocks and predictive demographics based on a hundred different factors. Ironically, it is modernity’s “new modes and orders” that have conscripted the computer as “cyber-oracle” to provide the unseemly means to the contemporary acquisition of power. And since it can no longer answer the qualitative moral questions related to the pursuit of the good life, today’s purveyors of Political Science have lowered their vocation to that of morally neutral technicians hocking their art, much as the Sophists did 2500 years ago to the highest bidder. And like the Sophists, their techniques are dispensed to men whose sole burning ambition is to rule, even if they rule unjustly.

The Spirit of Conservatism has embedded within itself that proclivity for the past, and it will not relent, even if Progressivism rides the tsunami of the future like a Colossus. In consulting the historical regimes of man over millennia, true wisdom can offer a thousand reasons why the heart of man is suspect and why the accumulation of power should not be concentrated into arrogant fists that would scrape the earth clean of yesterday’s vestiges — even as socialism bulldozes its highway to The Earthly City. Those who stare unblinkingly into the future care little about what is really occurring in America. With a wave of their hand they dismiss the corruptive capacity of political power alloyed with the darkened heart of ambition. Nevertheless, for the true believers of the Left, history remains a troublesome vexation to be dealt with. Indeed, the careful study of the past by honest and sober minds raises “inopportune” questions: such as why a man might prefer agonizing over the salvation of his soul instead of the less transcendental pursuits of: wealth, ease, women, meat and drink. Moreover, if that same questioner’s musings were more attuned to the political, one might ask why are man’s humanist dream castles, unhitched from the tether of God, more likely to contain rooms that house abortionist’s drains, canisters of Zyklon B, or even administrative death panels that coolly terminate under the guise of egalitarian compassion?

Recently, a student of mine asked me a simple but honest question about history and why we should pay attention to old dead things. I answered that if we did not know where we had come from, we surely won’t know where we are bound — and he seemed satisfied with this. There is an old Russian proverb: Dwell on the past, lose an eye; forget the past, lose both eyes. Modernity’s blind voyage into the future, without the dead reckoning of charting both fore and aft, guarantees a perilous journey without benefit of sun, moon or stars to navigate home. Holding our sextant up into the black velvet night, and with no clue from whence we had set sail, we should soon have forgotten what we had once appeared to be.

Glenn Fairman writes from Highland, Ca. He can be contacted at [email protected] and followed at www.stubbornthings.org and on Twitter.

In Case You Missed It:  Leading scientists publish review warning that COVID-19 booster shots are “not appropriate” and lack supporting data
Posted in Freedoms.

Dr. Ben Carson put forward seven principles today that he says will guide him as he develops the conservative alternative to...