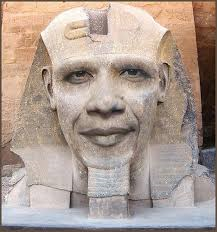 While cloistered in the ease of my writing den, I happened upon the following while rifling through a book much older than myself. It is, I am sure, a poem that the majority of you have at least a passing familiarity with: Shelley’s “Ozymandias”

I met a traveller from an antique land
Who said: `Two vast and trunkless legs of stone
Stand in the desert. Near them, on the sand,
Half sunk, a shattered visage lies, whose frown,
And wrinkled lip, and sneer of cold command,
Tell that its sculptor well those passions read
Which yet survive, stamped on these lifeless things,
The hand that mocked them and the heart that fed.
And on the pedestal these words appear —
“My name is Ozymandias, king of kings:
Look on my works, ye Mighty, and despair!”
Nothing beside remains. Round the decay
Of that colossal wreck, boundless and bare
The lone and level sands stretch far away.’

I don’t quite understand just why my mind superimposed Barack Obama‘s countenance on that desolate stone. Perhaps it lies with the futility of obsessive pride or merely a species of schadenfreude as we delight in his political misfortunes playing out before our eyes. Immersed ninety fathoms deep in a trench he has dug with his own golden spade, the “most transparent presidency in history” is on the rocks because Captain Queeg and his advisors could no longer read their stars in the night sky.

Memo to History: the vocation of Community Organizer is a poor resume choice for America’s highest civilian office, and political agitation would seem to be incompatible with nurturing a republic in so many ways. In truth, that facile art is more attuned to flushing Drug Dealers out of stairwells in housing projects or in subtly steering nominal 8th grade intellects towards candidates of the local CPUSA.

For the man who would be America’s primer inter pares, a persistent policy of pandering to our moribund “Cities of Outstretched Palms” might be effective in the short term, since their wretched masses have skyrocketed under his compassionate watch. But in bad-mouthing the vast expanses of “Cracker Country” as some redneck plantation chock full of “Marlboros, Methodism and mullets,” the political judgment of Obamandias and Co. errs in the extreme. As it now stands, these bitter clingers to tradition and self-sufficiency are reaching the outer limits of toleration. Yes, Tea Party types are fed up biding their time and keeping their powder dry while waiting for that inevitable last straw which unleashes the Kraken. And when this finally happens, no constituency of EBT card chiselers, phalanx of cemetery-dwelling voters, or nursery school full of red diaper babies will be of any lasting comfort. When the teat dries up and the shotguns are racked, Obamalogos will be scraped off Prius bumpers faster than Michael Moore can plug up a toilet on Thanksgiving.

But seriously folks: For a nation founded ironically in the spirit of e pluribus unum, our festering culture war is exacerbated by the fact that Obama is such a piss-poor politico. He sorely lacks the political chromosome; and instead of making inroads and growing coalitions, he burns bridges and marginalizes. More than any other president before him, he has alienated the races from one another because he is psychologically averse to settling for only half of his collectivist loaf. Even with his narrow but sufficient rhetorical gifts, he can only go so far with a sputtering ideological engine and a temperament ill-suited to the task of statesman in the classic sense. And these facts alone make him utterly dangerous because with his tin-eared political ineptitude and inability to compromise, he is like an arsonist at an Arco station. Who can doubt that the turbulent reign of Obamandias is anathema to a society that is rupturing itself into bellicose ideological camps?

Moreover, our President’s weakness of character and dearth of gravitas makes him ripe pickings for any number of T-Rex’s (posing as nation states) who salivate at the first whiff of flaccid indecision. But to be honest here, Obama’s poorly veiled contempt for traditional America, and for those who love her, is itself derived from a near congenital predisposition to make common cause with any enemy: whether they slither here or abroad. And while in the end his quest to fully dismantle America cannot succeed, he and his compadres will summon their last drop of bile attempting to extract a pound of flesh for every alleged crime we have committed against “History.” Unfortunately for us, even if he cannot close the deal, he still has the power and potential to set into motion enough societal wrecking to hamstring America for years, if not decades.

In the grand scheme of things, the United States doesn’t need a Progressive Philosopher-King to define politics from the whimsical perspective of the blue-nosed academician. There are ten thousand men stationed on the periphery of America’s seats of power who well understand the true rudiments of economics and human nature, and who could lead simply by following the sage blueprint of our Founders – men ill-suited to bread and circuses or the political sleight-of-hand that adds a quarter to the workingman’s left pocket as it draws a twenty from his right. We need men and women whose political vision does not bring out the worst in America’s character. It is the way of Progressives to perpetually promise the bounty of the banquet table; but in the end they deliver dog scraps – even as they call this political transaction social justice.

Barack Obama’s Progressive’s recipe for managed healthcare is a slow motion off-the-rails train wreck. The pain it will distribute as it is implemented both now and in future years (should it survive) promises increased suffering for the managed — although not so much for the managers. Liberalism’s rule of unaccountable technocrats can never be considered true politics in the classical sense, just as Marxism, in all its variant forms, is merely a grandiose apologetic for the docile herding of humanity. That Obama is a proven wrecker who can deftly wield prominent clusters of guilt-ridden self-loathers and government grown parasites as bludgeons to malform society makes him, in the end, a shrewd politician in only the most venal sense. But as a man who is by oath to God charged with shepherding the greater interests of the whole, he is as null a cipher as they come – even if he makes screaming Planned Parenthood hausfraus wet their chonies and faint dead away.

Having played their brief day in the sun, Time alone has the final authority to pronounce both King and Slave fools. But In the full and wise calculus of History, whose penetrating eye nothing escapes, Obama is Obamandias: whose haughty frown and wrinkled lip are buried deep in a box filled with sand — reserved exclusively for felines.

Glenn Fairman writes from Highland, Ca. He can be contacted at [email protected] and followed at www.stubbornthings.org or on Twitter.

In Case You Missed It:  The most epic and dangerous economic STORM in history is now upon us
Posted in Freedoms.

Jewish Home Chairman Naftali Bennett published a manifesto on Sunday morning explaining why he believes that the Palestinian Authority (PA)'s...