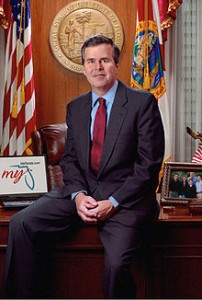 Rep. Raul Labrador (R-Idaho) lambasted former Florida governor Jeb Bush today over his remark last week that it was an “act of love” for immigrants to illegally cross the border into the United States.

“Comments like Jeb Bush’s and other Republicans, what they’re doing is they’re pandering to a certain group of people,” Labrador said at the monthly Conversations with Conservatives hosted by The Foundry. “And I got some news for you: If we pass immigration reform tomorrow like some members of our conference want to do, they’re not going to vote for the Republican Party.”

The American people and especially Hispanic Americans, are going to vote for the Republican because they feel  that our party’s providing more opportunity, it’s providing a better way of life for themselves.”

Labrador also touted the importance following the rule of law had to American culture.

“What’s ironic about this whole thing is that many of these people that are trying to get into the United States, they’re leaving their nations because their own nations have no respect for the rule of law,” he remarked.

“And what people like Jeb Bush and others are saying is that we also will have no respect for the rule of law,” Labrador continued. “And then we will be turned into the nations that these people are leaving.”

Study: All But Two Multiple Public Shootings Since 1950 Took Place Where Guns Were Banned

Author and Crime Prevention Research Center Pres. John Lott was interviewed on WMAL's Morning's On The Mall with Larry O'Connor...