A potentially dangerous signal sent by a released terrorist to jailed terrorists through official Palestinian Authority (PA) TV has been exposed by Palestinian Media Watch (PMW). 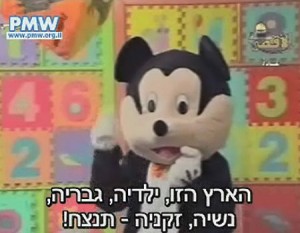 “I have a present for the guys, right after my arrival home: I send them love [makes heart sign], victory [makes victory sign], and a few people have signs between me and them, and they know them [additional sign with thumb and index finger]. And, Allah willing, may their aspirations be realized,” said the terrorist, Bilal Abu Hussein.

Hussein, while in prison for blocking roads and arson, along with three cellmates murdered another prisoner suspected of collaborating with Israel. He was sentenced to 36 years, but released last December in the terrorist release “gestures” for peace talks.

The message, made over PA TV in early January, has been exposed now amid wide-spread evidence of signals passed by terrorists in and out of Israeli prisons.

On Wednesday it was announced that six terror suspects in Jerusalem were arrested. The six had been running a “legal practice” dedicated to aiding Islamist terrorists from Hamas and Islamic Jihad.

In reality, they used the legal practice as a cover to traffic money, pass secret messages and generally facilitate communication between terrorists in Israeli jails and operatives throughout Israel and even abroad.

PMW revealed a coded message on PA TV last November sent by a terrorist to his brother in jail, indicating he would kidnap an IDF soldier to get him freed. The terrorist four months later botched the kidnapping of IDF First Sergeant Tomer Hazan Hy”d and murdered him. Later he confessed to having sent the message to police.

A new report suggests that there is a massive wave of illegal immigration coming to American soon. For USA Today,...