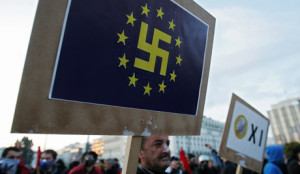 Fascism is seeping into and steadily growing in the United States amid the Ukraine crisis. Norman Pollack, a Professor of history and the man who is currently writing a book entitled The Fascistization of America: Liberalism, Militarism, Capitalism suggests in a recent article of his that the inner core of fascism is in all actuality capitalism. He goes into detail about how the US is slowing becoming a fascist regime. Pollack starts off his article on counterpunch.org, by clarifying what fascism truly has at its core—capitalism.

The writer starts explaining in detail to his readers what he means by one of his first statements.”The real thing at an advanced form of development: monopolization, greater cohesion through trade associations, neutralization of labor as a collective-bargaining social force, above all, an hierarchical class system with commanding decisions at the top then filtered down through gradations of rank, integrated with and complemented by the political-structural framework of business-government interpenetration,” Pollack explained in his article on counterpunch.org.

This very idea of centralized power settled into the synchronicity of corporate entities paired with the State. In all truthfulness, the State seems to be better off if it has far more power in order to cater to and rightfully guard the business system, it’s complete and utter dominance over labor, its control over the entering of foreign marketplaces, and its extended focus through blocked conflict with the competitors, Pollack believes these characteristics ring a bell to the time of the 1930s in Germany.

Even though the world is clearly past that era in time, as it is already 2014, it has been suggested that the German stage has been superseded. “Our “cartels” disguised by other names, our rate of concentration the apogee of capitalist inner logic. From here it is readily apparent the appetitive and combative nature of capitalism, egged on or reinforced by the Statist dimension: America’s version of globalization to a tee, “Pollack wrote out in his article on counterpunch.org.

The author points out that America is not as innocent as it looks or acts in the world, especially under the control of Obama. He illustrates a metaphorical chess game going on with the Ukraine conflict being set in motion, and each country or person being a piece on the board. The rooks, he states, are IMF and NATO, the queen is all-purpose privatization, the pawns are “friends and allies” that have been persuaded to do America’s bidding and last but not least is the king.

The king is not just one single piece but several including Obama’s national security team such as the CIA, NSA, and Pentagon agents. However, even then Washington is filled from every quarter, bipartisan all the way through in making its killer instinct sharper, according to Pollack.

“Kerry and Biden are the cheerleaders for imperialism and, increasingly, militarism, for they, and Obama, recognize the two are inseparable, to which they seem especially dedicated. Ukraine has found its soul mates,” Pollack explained in his article. The Ukraine crisis is helping people see the West’s true colors and perhaps undeniably what the US stars and stripes actually are in favor of.