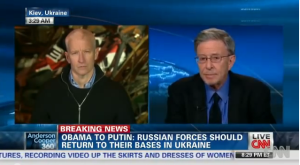 NYU Russian Studies Professor Stephen Cohen explains the reaction of Russia’s President regarding the overthrow of the democratically elected government of Viktor Yanukovych.  Professor Cohen makes a very valid case for Putin’s reaction to the NATO expansionist strategy of the past fifteen years.   Russia’s  tolerance of past NATO aggression and continuous  testing of Russia’s resolve by the West.

It is a surprise Prof. Cohen was even invited to speak in the liberal biased media.  He asks important questions that most Americans with the faults sense of entitlement are not willing to face.  If it’s not a black-&-white issue, the American public’s IQ drop dramatically.  Rather you like Putin or not, the real issues is that Russia is not a weak nation to be treated like Iraq military or politically.

Even those mainstream commentators who play attention to facts and evidence over narrative are careful not to suggest very obvious conclusions. Here the Professor describes how the west’s ultimatum to Ukraine to choose between Russia or the west was the cause of all the recent trouble there.