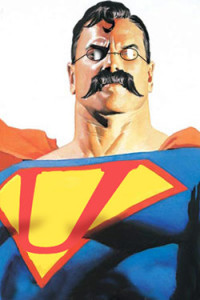 “The duty of a patriot is to protect his country from its government.”  Thomas Paine

Any aficionado of Golden Age comic magazines circa WWll will tell you that their writers and artists of that era were not kind to America’s Axis enemies.  Indeed, characterizations of the Nazis as monocled Teutonic monsters and the Japanese as yellowish-green buck-toothed dwarves reflected an outraged mindset of an America that had not yet succumbed to corrosive self-doubt.  And if upon seeing these cultural relics of a simpler age we elicit an inner groan as our more refined sensibilities are taken aback and the judgment of racism hits us with its self-righteous cudgel, well, then such judgments themselves are bloodless – they are emaciated moral evaluations divorced from context and the utter reality that such a time was rife with monsters and moral dwarves who nearly extinguished the Free West in “a damn most close run thing.”   In knowing the historical horrors of Germany’s and Japan’s regimes, can anyone deny that as realized flesh and blood entities moving within history — in their full internal essence — they were not those things — and more?

And yet, we cringe upon viewing the cover of Action Comics #58 (March 1943) which features The Man of Steel turning a printing press producing posters with the message: “Superman says: You can slap a Jap with war bonds and stamps.” If we then fast-forward to 2011, how surreal it becomes when in Action Comics #900 we learn that the Kryptonian cum American ubermensch is planning on renouncing his U.S. citizenship before the U.N.  Apparently, after monitoring a protest in Teheran, Superman states: “I’m tired of having my actions construed as instruments of U.S. policy…. Truth, Justice, and the American Way”…it’s not enough anymore.”  Now, although this “Great Divorce” was never consummated, (and perhaps was a marketing gimmick for a genre facing serious financial challenges) Superman’s post-modern epiphany is nevertheless emblematic of a Progressive zeitgeist that rightly or wrongly perceives nationalism as constrictive and counter to the inter-connectivity of the planet. In essence, the perception of patriotism is hereby being called into question as a passé relic and a hindrance to what many believe is our inexorable future as a universal homogenous people.

Patriotism is defined as a primal love of one’s own country or homeland and is manifested in a visceral preference for the customs, laws and culture(s) that reside within. Men are tied by their natures to what they know and the entire subliminal mélange of foods, holidays and unexpressed ideological assumptions all combine to form the warp and weft of patriotic ardor.  This being so, selfless love is often demanded and volunteered unquestioningly to a motherland that we deem more than worthy to perform the ultimate sacrifice for; and Horace’s oft quoted line “How sweet and fitting it is to die for one’s country” can perhaps only be balanced by Patton’s prudential line: “No bastard ever won a war by dying for his country; he did it by making the other poor bastard die for his country.” In affirming Horace’s point, even the Nazarene has said: “Greater love hath no man than this, that he lay down his life for his friends.” Therefore, to surrender one’s blood for the perpetuation of a way of life that a man will no longer share in requires either a blessed transcendent hope beyond the rewards of poppy strewn fields or a temporal resolve that one has devoted his substance to a cause of greater justice: of which both might prove equally to be true.

But how easy it is to talk the talk without walking the walk.  As I type away at my keyboard, a thousand patriotic exhortations are passing through Conservative Facebook timelines waxing poetic concerning the “Tree of Liberty being watered with the Blood of Martyrs” or images of majestic American Eagles clutching crosses and staring down that heinous villain of 1600 Pennsylvania Avenue.  But then it is easy to hit “like” and “share.” In a surreal age when flying drones might just be hovering high above men’s heads – silently weighing their fidelities, no longer are the frontiers of patriotic sensibility so cut and dried. In perilous times, a man’s sworn enemy could one day be the same government that he once swore allegiance to as a child. But perhaps I am now only whistling past the graveyard…

If I may be so frank: The same regime that denies a hot breakfast to its troops in Afghanistan and slashes their health care packages is the same one that coddles its parasitic voting bloc back in the homeland and advertises food stamps in Mexico. This state of affairs has done little to fan the patriotic zeal of soldiers living in the cross-hairs. Moreover, a handful of men and women come home nearly every day from that grievous Curse of a Land: either in metal crates or as the victims of mayhem in the cause of a morally compromised people. The shedding of American blood for our own emancipation or for the worthy causes of Jew against Nazi or Western Liberty contra Communism are no longer our lofty aims. In their stead, we are offered a cause that is no cause at all: We are to fight against those who wish to burn the eyes out of a child with acid for the crime of going to school on behalf of the interests of those who feel justified in keeping those schooled women cloistered at home. Such are the hair-thin distinctions in the thorn-ridden Middle Eastern soul: where on the plains of Kandahar young soldiers are abandoned by their CIC as pawns to be broken in a game whose rules they are not privy to know.

In such a God-forsaken place, the fervor of patriotism dissolves in the universal acid of cynicism where friend and foe are as interchangeable as batteries. How difficult it is to patriotically defend an abstraction when a population and its wicked worldview are not your own; where you are expected to care more about a people’s freedom than they do themselves as they toil in the charnel house of Islam.  Indeed, the patriotic soldier’s fervor freezes over in the wake of every craven IED placement or demoralizing “Green on Blue” treachery. And all the while, the glory of self-sacrifice grows as threadbare as a mullah’s prayer. A brief excerpt from Wilfred Owen’s famous poem Dulce et Decorum est  (1917)  describing a WWl gas attack washes away any such pretentions of vain platitudes:

…If you could hear, at every jolt, the blood

Come gargling from the froth-covered lungs

Obscene as cancer, bitter as cud

My friend, you would not tell with such high zest

To children ardent for some desperate glory,

In a Manichean world of intolerable human depravity, it is anathema for gallant men to fall prey to the moral weakness that attends libertarian isolationism or utopian pacifism. That being said, perhaps one of the better virtues of the ancient world was that it greatly esteemed the act of dying well rather than living contingently upon the good graces of one’s masters. But we are not Vikings preparing for Valhalla.  We must somehow strike a balance between that reflexive patriotism that would have us surrender all reason and judgment for the sake of a flag as we charge screaming into a machine gun nest and that bloodless timidity that abhors exertion and sacrifice and is as much given to the terror of life as it is of death.

It is patriotic and courageous for a free people to hotly debate the ends and means of its government who ferries our treasures abroad for the sake of what might indeed be a foreign policy terminating in ruin – and by treasure we mean our brave men and women.  More than any time in the history of our fair republic, there are hollow men in positions of great power that have despised the oath they once foreswore and are more concerned with the ascendancy of global abstractions than any legacy of the Fathers.  In succoring hands that if given the opportunity would crush our children’s heads in service to a god of morbid terror,  these selfsame men wrap themselves in a deconstructed veneer of red, white, and blue reeking of the stench of dead European ideologies exhumed for our behalf. As their veil of patriotism, as Johnson said, becomes the last refuge for such scoundrels, it becomes incumbent upon we who would cleanse our palates of such a vile taste to methodically count the cost as we affirm our patriotic vision.  On a singular day perhaps not too distant, a bell will be rung: and if not in jubilation, then in memoriam.

Glenn Fairman writes from Highland, Ca. He may be contacted at [email protected] and followed at www.stubbornthings.org and Twitter.

In Case You Missed It:  Covid "vaccines" are shedding deadly spike proteins via "skin-penetrating nanoparticles"
Posted in Freedoms.

Since taking office in 2009, President Barack Obama has formally proposed a total of 442 tax increases, according to an...