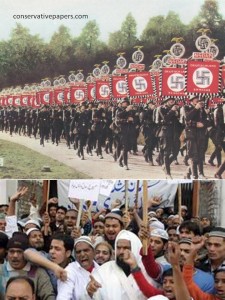 Disowned by his university and branded a traitor by his fellow Palestinians. This after a professor took 27 college students on a trip to the Auschwitz concentration camp as part of a project to teach empathy and tolerance. The Washington Post takes up the story:

A university student who went on the trip but asked not to be named because of the charged atmosphere said the visit changed him. “You feel the humanity. You feel the sympathy of so many people killed in this place because of their race or religion.”

“Most people said we shouldn’t go,” the student said. “It is a strange thing for a Palestinian to go to a Nazi death camp. But I would recommend the trip.” He said it did not diminish his desire for a Palestinian state.

Matt Yglesias, now with Vox, finds this chart of ours misleading: He admits that the data is correct and that...