WASHINGTON,  (UPI) — Oligarchy is a form of government in which power is vested in a dominant class and a small group exercises control over the general population. 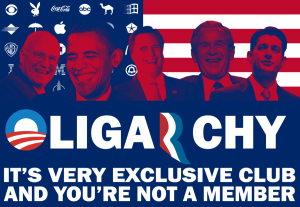 A new study from Princeton and Northwestern Universities concluded that the U.S. government represents not the interests of the majority of citizens but those of the rich and powerful.

The resulting data empirically verifies that U.S. policies are determined by the economic elite.

“The central point that emerges from our research is that economic elites and organized groups representing business interests have substantial independent impacts on US government policy, while mass-based interest groups and average citizens have little or no independent influence,” says the peer-reviewed study.One of the study’s other interesting findings is that, beyond a certain level, the opinions of the public at large have little impact on the chances a proposal has of being enacted.

What do our findings say about democracy in America? They certainly constitute
troubling news for advocates of “populistic” democracy, who want governments to respond
primarily or exclusively to the policy preferences of their citizens. In the United States, our
findings indicate, the majority does not rule — at least not in the causal sense of actually
determining policy outcomes. When a majority of citizens disagrees with economic elites and/or
with organized interests, they generally lose. Moreover, because of the strong status quo bias
built into the U.S. political system, even when fairly large majorities of Americans favor policy
change, they generally do not get it.

The report consoles that “Americans do enjoy many features central to democratic governance, such as regular elections, freedom of speech and association” but goes on to warn that “we believe that if policy making is dominated by powerful business organizations and a small number of affluent Americans, then America’s claims to being a democratic society are seriously threatened.”

In Case You Missed It:  Countdown to ZERO IMMUNITY... vaccine victims are seeing their immune response drop by about 5% each week, with long-term consequences mirroring AIDS
Posted in Freedoms and tagged democracy, Election, Freedom, United Socialist States of America, US Citizen, White House.