Syria has submitted a “more specific” list of its chemical weapons to the Organization for the Prohibition of Chemical Weapons (OPCW) after discrepancies were reported by inspectors on the ground, officials told Reuters Thursday. 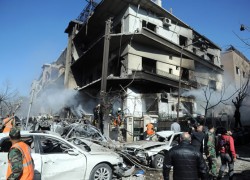 The international operation to destroy Syria’s stockpile of deadly chemicals is a joint Russian-U.S. plan that was endorsed by the UN Security Council in September. The resolution was a last-minute measure to prevent an American strike on Syria in retaliation for the regime’s alleged use of chemical weapons in an attack on a Damascus suburb in August that left hundreds dead.

But Damascus is several weeks behind schedule in handing over the weapons for destruction, with multiple delays in the process blamed on “bad weather” and the front moving too close to the transfer sites.

Member states have now been raising questions to the OPCW about the finer details of Syria’s arsenal, a diplomat told the news agency. The officials said the original list had been based on estimates, not exact amounts of toxic agents found in storage and production facilities across Syria.

The joint UN/OPCW mission in Syria found “discrepancies between what they found, and what was on the original declaration”, one diplomat told Reuters.

OPCW spokesman Michael Luhan confirmed a revised list had been submitted. “For some of the stockpile, ranges of quantities had been provided. Now they are being replaced with specific amounts,” he said.

The specific list was submitted only after new revelations were made during on-site inspections, he said, declining to provide further details on the discrepancies. He did say that no new chemicals had been added to the revised list, and that Syria has committed to handing everything over by April 27, 2014.

An official at the OPCW, who spoke on condition of anonymity, confirmed a new list had been submitted, but said it was routine.

Last week, rights groups claimed that the Syrian government dropped “explosive barrels that produced thick smoke and odors and led to cases of suffocation and poisoning” on the village of Kafr Zita. Damascus blamed the Al Qaeda-linked Al Nusra Front for the attack, which allegedly killed two people.

Earlier this month, Israeli officials also claimed that another chemical attack had been launched in Syria – this time, in Damascus’s eastern Harasta neighborhood.

The reports are the latest in several claims that chemical weapons attacks in Syria have continued despite the OPCW/UN operation.

In February, opposition groups claimed the government had killed at least a dozen people with chemical weapons in the town of Deraya.

One month earlier, a group of activists and refugees went to the White House over claims of another gas attack in Damascus; the US has not acted on the charges.

Duncan on Mexican Women Who Cross U.S. Border to Give Birth: ‘These Are Our Kids’