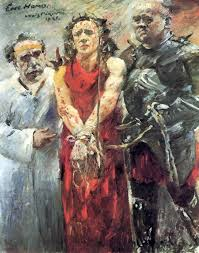 Behold the Man in ruins.

Because we have not drank deeply enough of God, this spectacle of Passion — bathed in blood and ribboned flesh set before us every spring, has been relegated by a bloodless Modernity as either a callow backdrop for children’s baskets or an abstraction of the primordial myth of death and re-birth. And if we are therein guilty of transposing legend for substance, then it is as a result of our age’s worldly complexion – a temperament that has cunningly bled dry the transcendent character of Calvary’s full rich drama.

Nevertheless, there is truth in metaphors. Indeed, the thaw of winter and the return of the sweet fragrance from warm grasses and flowers are themselves the physical emanations pointing us to that great turning point in history: where the axis of humanity spun round in a three day succession from abject despair to exhilarating joy. On that fateful Sunday morn, the character of life itself blossomed by virtue of the profoundest of revolutions: the final reconciliation of Divine Source with fallen creation…all through the heroic actions of a brutalized blood-stained Man.

Left to the introspection of humanity’s native reason, the world finds the Cross objectionable in so many ways. The mere suggestion that men are in need of deliverance scandalizes the Humanist heart. Such a perspective rejects the existence of sin out of hand and answers humanity’s indictment with the half-truth that God’s character is solely one of abounding effervescent love. The rose-colored theology of liberal “Emergent” pastors, exemplified in Brian McLaren and Steven Chalke, flippantly dispose of the orthodox Doctrine of the Cross as a muddled and depraved misapprehension of the Gospel. For minds of this disposition, the over-brimming love of God could never have conceived such a horrible propitiatory retribution for His Only Begotten Son. This sanctioning of the Cross’ terrifying and bloody redemption would make God more human – nay, more diabolic than divine. Out of hand, they pronounce that this understanding of God is akin to a vengeful Father participating in “Cosmic Child Abuse” – and emblematic of a twisted view of justice more rooted in the demonic than the beatific. But in weighing their sweeping accusations against what we know from scripture: we are not convinced.

It is written: “Cursed is everyone hung upon a tree.” Nonetheless, such a curse would have been irrevocably our own had not the Son of Man voluntarily submitted Himself to answer for horrific crimes that were never His to bear. And those who take the Cross to task with the allegation that it is but a primitive expiation of bloodguilt, more fitting for a barbarous pagan mystery religion, have their eyes affixed purely on the carnal reckoning of things. They are blind to the revelation, that in the grand mechanics of creation, it is God crucifying God – taking Man’s penalty upon Himself to satisfy both the necessity of justice and the outreach for love that is so utterly incomprehensible to the seditious nature of the fallen mind.

The Dying God dies not in annihilation, but in sweeping conquest over Death itself – and graces restitution for the crimes of His wayward children. He makes intervention, not because humanity possesses any intrinsic worth or are themselves deserving of such a magnanimous sacrifice, but precisely because they do not….they cannot. To offer up one’s life for a good man is noble beyond words; but what can we say of One who steps out from His unapproachable Holiness for the sake of: a brigand, a liar, a murderer, an enemy to every good and glorified thing that God had ever knew? In truth, it is unfathomable for the unregenerate heart to reconcile and process the full implications of such sacrifice. And yet, in God submitting to the unspeakable violence of the Cross, the Author of All Things does just that, and much more.

At the onset of those three pivotal days that were meditated upon and grieved over before the Pillars of the Universe were poured, a Roman procurator presented before humanity a scourged and bloody remnant of a Man crowned in a cruel web of piercing thorns. In pronouncing Ecce Homo – Behold the Man – Pilate offered unto us the mirror of our choices. By championing the Murderer over the Lamb, mankind set into stone, for all of history to meditate upon, its preference for the two stark alternatives placed before it. And in doing so, revealed to us forever the Cross’ indisputable logic.

Every morning that we awaken, the dilemma is laid out before us anew as we struggle between the Light and the World. In stepping faithfully towards Golgotha, we share in His mortification that leads the way towards Life and Beauty; and in turning our backs to Him, we paradoxically participate in His execution from afar: washing our hands of Him as Pilate did so long ago. Through encountering and assenting to the Man, a great stone rolls away — unleashing that infinite richness of Life that we have so longed for. In denial, that burdensome stone rolls shut — encasing us within that self-imposed absurdity of despair that comes as we sink into the human will’s mad labyrinth.

Though a flaming sword drove a stiff-necked mankind from its paradise, at the climax of the long road before us awaits rest for the prodigal heart. There will never be a better time than now to lay aside that burden and one’s rebel arms. Know this: You are prized above many things; not by virtue of meriting such favor– but because He loves you and bore your figure upon Himself when He consented to that Tree of Woe — just as if that wretched sign nailed in tears and blood was inscribed with your name alone.

Glenn Fairman writes from Highland, Ca. He can be contacted at [email protected] and followed at www.stubbornthings.org and on Twitter

Did you know that the number of Americans getting benefits from the federal government each month exceeds the number of...