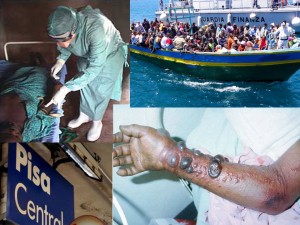 Though officials at the World Health Organization are feverishly working to stop the spread of the Ebola virus in what is now seven African nations, their efforts may be for naught. In Guinea, a hot spot for the deadly contagion, government health officials have said that the outbreak is nearly under control. Yet, Reuters reports that the government “planned to stop publicly releasing the death toll to avoid causing unnecessary panic.”But panic may be in order.

It appears that virus may have crossed out of Africa into Europe. 40 illegal alien migrant workers from the outbreak area, who came ashore in Pisa, Italy, are showing signs of Ebola infection and are being isolated in Pisa Italy because of fever and “conjunctivitis”(bloody around the eyes).

According to the World Health Organization, this strain of Ebola is entirely new and although it is close to the Zaire strain, it is different, thus accounting for false-negative test results . . . . . for weeks! Those false-negative results meant people who were actually infected with Ebola, were returned to their families and neighborhoods to recover from what they believed was the Flu or a case of food poisoning, only to spread the Ebola further.

There is currently a complete lock down of a hospital in Pisa, where it is believed to have infected some 40 individuals. Other reports trickling in from various sources like social media indicate the virus may have also appeared about 50 miles from Pisa in Tuscany, Italy.

Alarmingly, a story that appeared about the outbreak on national news wires was reportedly removed by the Italian government for “national security reasons,” suggesting that there is more to the reports than Italian officials are willing to express to the public at this time.

The outbreak of Ebola Virus in seven west African countries has broken through all containment efforts and is spreading like wildfire. According to Christian Relief groups working in Guinea and Liberia, the number of confirmed infections jumped 15% in just the last 24 hours.

Ebola is one of the most virulent diseases known to man and can kill up to 90% of the people it infects in a very short time period.The result has been a complete loss of containment of this Ebola outbreak and possible worldwide spread of the disease, due to open border policy by the Obama administration there would be no way to stop it spread into the United States.

Probabilities of unchecked infection at this point, based upon a method of travel, times and frequencies of airline flights to various cities, also including certain assumed volumes of “mixed maritime” traffic between north Africa and southern Europe – the Probability that Ebola will strike is:
63% in Italy within 8 days
44% in Spain within 15 days
77% in Riyadh/Saudi within 21 days
40% in Libya within 25 days
29% in the US within 28 days
37% in Egypt within 33 days
By the time we get to 35 days, it can be in 25 countries on 4 continents.”

In Case You Missed It:  Fauci Claims No "True Basis" In Concerns Over Long-Term COVID Vax Side Effects
Posted in Freedoms and tagged Europe, Healthcare, Illegal Immigration, Italy.