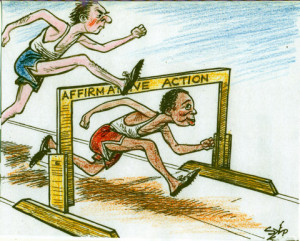 In a 6-to-2 decision in Shuette v. BAMN, the Supreme Court upheld a new provision in the Michigan Constitution that bars state agencies from using racial preferences (i.e., affirmative action) when making state decisions, including colleges admissions at schools such as the University of Michigan.

The justices split between several opinions, with Justice Anthony Kennedy writing the lead opinion for three justices. In doing so, a majority of the Court narrowed the reach of two racial preference cases from 1969 and 1982 that have long been criticized by conservative legal scholars.

It is outlandish to claim that a policy like Affirmative action discriminates based on race is not racism.  Racism is racism whether it is aimed against whites, blacks, or anyone else.

Affirmative action assumes your need for University admittance assistance based on the color of your skin, this policy assumes if your white you don’t need assistance, if you have a darker tone you do. It is discrimination plan and simple and violates the civil rights of those effected negatively by these laws.

Democrats have never got past the Jim Crow days. For those that don’t know about Jim Crow, Democrats had enacted “Jim Crow” laws prohibiting everything from interracial marriage to racially integrated public school systems. They were laws targeting a specific group based on the color of their skin. Democrats are up to the same old tricks, only today they target a different group.

Earlier this year Barack Obama hosted an openly racist event at the White House to unveil his new racist plan based on a US citizens skin color, it called the “My Brother’s Keeper” initiative, to make sure that only young man of color will have government help, young white men need not apply. Under Obama we are not US citizens, but Black people, Latino people, Asian people and White people.

Almost all of the largest Fortune 500 corporations have affirmative action and diversity programs that discriminate against white people in hiring. They also have programs of discrimination that favor non-whites in promotions and advancements. Obama ignored the fact that blacks are often overrepresented at a rate much higher than the 13% of the population they comprise in the U.S.

The Washington Times ran an expose on the racial makeup of the capital’s more than 3,000 public transportation bus and rail drivers for northern Virginia, D.C. and Maryland. 97% of the bus and train operators at the Washington Metropolitan Area Transit Authority [Metro] are black,” wrote The Times, although blacks comprise only 28% of D.C.’s metropolitan area.

Citing several examples of discrimination, the article noted: “a white male engineer near completion of a Ph.D. was passed over for a management position in favor of a black man who was barely literate.

In another typical examples, court and Metro records show, a black man who spent eight years in prison for dealing PCP was promoted to a high level management position soon after his release, and whites in the same positions as blacks with far less seniority are inexplicably paid less.”

And these are not low paying jobs, explained The Times. “The average Metro worker had a $60,000 salary, which rises to $69,000 including overtime. That is more than 71% of area residents who had an income in 2010, including 62% of whites, census records show.”

Blacks are also favored over whites in the 11 million government jobs including he U.S. Post Office, which has been called “a work program for blacks.” They make up over 20% of postal employees, according to a statement from Mack Julion, president of the Chicago branch of the National Association of Letter Carriers.Incredibly, it’s estimated blacks make up almost 80% of mailmen in Chicago, Obama’s hometown.

It is also well documented that blacks are admitted even to Ivy League universities such as Harvard, with much lower SAT scores than whites. The primary admission test today is called the Scholastic Assessment Test, or SAT. The typical score for students entering the nation’s most select colleges such as Harvard, Princeton and CalTech is 750 or above on both the math and verbal SAT.

Meanwhile, whites, who make up 65% of the United States population and tested on average 310 points higher than blacks on their SAT scores, only made up 44% of the admissions.

This is still not enough for the racist Obama, want to know if you qualify for Assistance under Obama his new My Brother’s Keeper plan, simply all you have to so is look at your arm and the color of your skin and this is how Obama will decide if you qualify for this new program or not.

Filmmaker on Why Media Doesn’t Cover Gosnell Trial: ‘It Asks Too Many Awkward Questions’

Producer Phelim McAleer talked today at The Heritage Foundation about his new project, “Gosnell Movie,” which examines the case of...