“I don’t care what you think unless it’s about me.” — Kurt Cobain

In the third book of Ovid’s Metamorphosis, the reader is charmed with the tale of Narcissus and Echo: a beautiful young man who spurned the raptures of love with a cursed water nymph.  Having despised the affections of countless suitors through aloofness and vanity, Narcissus’ mother recalled the birth prophesy of the wise Teiresias that he would have a long life “providing he never knew himself.”   It would be the tragedy of this unfolding augury that sealed the fates of the two as Echo wasted away to only a faint repeating voice and Narcissus caught an ill-fated glimpse of his own reflection in enchanted waters.  The myth ends in variations where the youth takes his life in a fit of melancholia and becomes a lovely flower. Unable to consummate a union with the cherished object of his inconsolable longing, no existence could be worth living.

This pagan tale, like all myths, serves as a metaphorical window to the psyche – a way to give flesh to the enigmas of the world or to the nobility and perfidy residing contemporaneously in the human heart. It speaks of the folly of self-adoration which culminates in conceit and idolatry – the arrogance wherein the world becomes a veritable hall of mirrors which only at the end unveils itself as an iron cage.  That this condition is a regrettable affliction is universally affirmed, since society renders lip service to altruism and the affectation of selflessness. But such a judgment itself becomes suspect in a society thoroughly saturated in the notion of “ego.” It is said that if you want to understand the nature of water, do not go to a fish.  Consequently, how formidable a task it is to plumb the depths of narcissism in a society that exudes self- adulation. The undertaking may be as onerous as querying a nation of 300 pounders on the subject of morbid obesity.

The prevailing culture in America today marinates in the worship of Self.  Our advertising buffets us in a relentless series of waves evangelizing society as to how life can become: fuller, easier, happier, longer, more beautiful, and more in tune with our rising expectations as we unendingly feed into the circular pursuit of filling that cavern without a bottom.  Moreover, as Oscar Wilde has so wryly noted, “To love one’s self is the beginning of a lifelong romance;” and the Powers of Commerce who stoke the Acquisitive Dream are wary cupids in Armani suits dedicated to the proposition that such ardor shall indeed by requited.  And lest we believe that such inordinate self love is founded upon a sincere desire for any objective beauty we possess, one needs only to reflect upon the brutal truth that age and its inexorable deterioration only intensifies the narcissist’s passion – for what he sees is not the semblance of things as they are but the chimera reflected on the vacant walls of the soul.  Such self love reigns forever at the center of the subject’s known universe – beginning in rapture and culminating in despondency.  Of the latter form, it is a metaphor for the epitomized doctrine of Hell:  an amalgamation of solitude and delusion that retreats of its own volition from others and the ever-diminishing light.

The romance with Self is nursed and spoon fed in the young by the enlightened necessity of self-esteem and watered ever judiciously from the fountains of self-actualization.  For the former, praise and acclaim are the default condition of educational pedagogy and are handed out like sweets regardless of toil or merit.  Few errors have entered into the Science of Human Education that have done such malicious harm to the character of youth as the self-esteem movement.  In raising up several generations of discrete black holes where all flattery and tribute are drawn up into the gravity of ravenous personality, our Lettered Titans of Edification have succeeded beyond their wildest aims in cultivating a product that is as fragile as a spider’s lattice and as enduring as a sand castle. Un-tempered self-esteem, exposed to the universal solvent of the real world of men and women, results in an awakening so rude that it often breeds despondency and cynicism -– to say nothing of the greatest of all vices of the Self: self-pity.  If we have come to believe that we are fully entitled to a station we have not earned, then our fate must be due to the fault of another.  Therein, a shallow cynical indulgence in self-pity renders us both useless to others and loathsome to ourselves.

If we are to fully understand how we have been shaped by this Humanist Modernity, we must reflect upon the knowledge that our society’s narcissism has been nourished with the penetrating oxidant of Self-Actualization.  The idea that we are self-creating personalities continually morphing until we reach a plateau of sufficient stasis and contentment seems to be a salutary goal; at least on the surface. Indeed, the struggle to ascend out of ourselves and to become more is consistent with our nature. However, as humanity has become untethered from its gods, and consequently its purpose, the act of “becoming” appears less like ripening and maturing and more like the search for a Humanist Holy Grail.  Devoid of a transcendent telos, the craving for happiness becomes an end in itself manifesting in: the quest for more things, more respect, and a more beautiful mate. In our narcissism we must have more things to fill up that aforementioned chasm that cannot be satiated, however we might try, by the merely temporal.

In chasing that elusive constellation of happiness, we jettison marriages to a tune of over fifty percent, since we are by right entitled to all the pleasure that our two hands can take hold of. We change partners, families, careers – some even change their sex.  In the shadow of the monumental “I,” a great many bounce through serial monogamies because they cannot commit to love for fear that a true soul mate is right around the corner.  And if they do commit, in the name of self-actualization they are covenant-bound between themselves and themselves to put to the flames the stability and happiness of loved ones in pursuit of the more perfect orgasm. This society’s free-floating narcissism is antithetical to the nature of true love – since true love is other-centered and willingly diminishes while it nourishes others to the exclusion and often to the detriment of Self.  Such love has no contingency and is as forthright and enduring as the Great Pyramid.  Self-less love, viewed side by side with narcissism, is as light unto darkness and as liberating and noble a trait as can ever be found in the virtues of humanity.

While perhaps controversial, some believe Ages that are prone to narcissism are also given to homosexuality. Excessive self-love and sexual self-gratification are intrinsically entwined; and sharing that erotic bond with one most like oneself physically is perhaps a logical progression in the chain. In loving a woman both emotionally and physically, one needs to stand outside oneself and learn of the intricacies of tenderness and patience that are endemic to her gender.  That trust and growth that blossoms with caring love and ideally results in the fecundity of life is both sanctioned by the God of Nature or Nature’s God and fulfills the Biblical Commission to be fruitful and to multiply.  While I have no doubt that great same sex lovers inhabit the earth, such attraction is undoubtedly rooted in the passionately erotic — towards the proclivity for beings most like one’s self: where a psychological insularity reigns.  It is perhaps, as some say, arguably easier to consummate one’s carnal appetite without either the burdensome consequences of exploring a gender little like ourselves or in having to take on the commitments of children and family that often result in a loss of autonomy and disposable income.  Remaining Peter Pan for all of one’s days is an idyllic dream for Lost Boys; but it also means never having to take one’s stand in the full organic Seasons of Life. And in this way, it can be said to be deficient.

In Dante’s Purgatorio xxvii, 101-108, the author and his guide, the veritable Virgil, encounter two characters from the Book of Genesis who are meant to symbolize the ethos of narcissism. He writes:

If anyone should want to know my name, I am called Leah. And I spend all my time weaving garlands of flowers with my fair hands, to please me when I stand before my mirror; my sister Rachel sits all the day long before her own and never moves away. She loves to contemplate her lovely eyes; I love to use my hands to adorn myself: her joy is in reflection, mine in act.
No greater curse can befall a people than to lose its capacity to truly love. Once they have begun down this stone-laced path, even the maternal natural love issued towards one’s own flesh grows cold and waxes subservient to the grandiosity of Self.  Every little callous clinical murder for the sake of convenience betrays this preoccupation with the mirror’s tyrannical hold upon she who stands before it and stares out into infinity –-repeating the Devil’s soothing admonition that when all things are considered, we are the last child left on earth who truly matters. The fabled curse upon that Beautiful Boy lay not in the knowledge that he desired, but that he desired only that which was wholly and completely his own: a sterile fate destined for any misbegotten wretch that gazes into a cesspool and calls it love.

Glenn Fairman writes from Highland, Ca.  He can be contacted at [email protected] or followed at www.stubbornthings.org or on Twitter 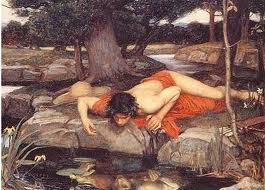 In Case You Missed It:  GENOCIDE: FDA officially authorizes covid vaccines for children as young as 6 months
Posted in Freedoms.

When Bin Laden was killed, the Muslim American Society defended his goal of creating an Islamic state in Afghanistan. BY RYAN...