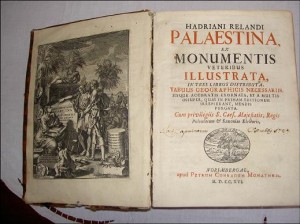 (Translated from the Hebrew by Nurit Greenger.)

The time machine is a sensation that nests in me when I am visiting Mr. Hobber old books store in Budapest, Hungary. Hobber learned to know my quirks and after the initial greeting and the glass of mineral water (Mr. Hobber is a vegan) he leads me down the stairs to the huge basement, to the Jewish “section.”

The Jewish section is a room full of antiquity books on subjects that Mr. Hobber sees to be Jewish. Among the books there are some that are not even worthy their leather binding. However, sometime, one can find there real culture treasure. Many of the books are Holy Books that may have been stolen from synagogues’ archives: Talmud, Bible, Mishnah, old Ashkenazi style Siddur, and others. Customarily, I open them to see who the proprietor is; who was the Bar Mitzvah boy who received the book two hundred years ago and to whom did he pass the book at the end of his days. It is simply curiosity.

Many of the books are written in the German language. They are books of Jewish rumination written by Christians or assimilating Jews. Sometime one can find a hand written Talmud volume that is very expensive; thousands of Euros, set in the specially aired cabinet. Hobber knows their value. Sometime one can find a bargain such as the book Palestina by Hadriani Relandi — its original professional name Palaestina, ex monumentis veteribus illustrata, published by Trajecti Batavorum: Ex Libraria G. Brodelet, 1714. One can find such original books in only few places in the world, also in Haifa University.

[Origina link for places where the book could be found and details about the author, etc.. Now down]:
http://libri-antichi.posizionamento-web.it/ palaestina-ex-monumentis-veteribus-illustrata.html

The author Relandi[1], a real scholar, geographer, cartographer and well known philologist, spoke perfect Hebrew, Arabic and ancient Greek, as well as the European languages. The book was written in Latin. In 1695 he was sent on a sightseeing tour to Israel, at that time known as Palestina. In his travels he surveyed approximately 2500 places where people lived that were mentioned in the bible or Mishnah. His research method was interesting.

He first mapped the Land of Israel.

Secondly, Relandi identifies each of the places mentioned in the Mishnah or Talmud along with their original source. If the source was Jewish, he listed it together with the appropriate sentence in the Holy Scriptures. If the source was Roman or Greek he presented the connection in Greek or Latin.

Thirdly, he also arranged a population survey and census of each community.

His most prominent conclusions

1. Not one settlement in the Land of Israel has a name that is of Arabic origin.
Most of the settlement names originate in the Hebrew, Greek, Latin or Roman languages. In fact, till today, except to Ramlah, not one Arabic settlement has an original Arabic name. Till today, most of the settlements names are of Hebrew or Greek origin, the names distorted to senseless Arabic names. There is no meaning in Arabic to names such as Acco (Acre), Haifa, Jaffa, Nablus, Gaza, or Jenin and towns named Ramallah, El Halil and El-Kuds (Jerusalem) lack historical roots or Arabic philology. In 1696, the year Relandi toured the land, Ramallah, for instance, was called Bet’allah (From the Hebrew name Beit El) and Hebron was called Hebron (Hevron) and the Arabs called Mearat HaMachpelah El Chalil, their name for the Forefather Abraham.

2. Most of the land was empty, desolate.
Most of the land was empty, desolate, and the inhabitants few in number and mostly concentrate in the towns Jerusalem, Acco, Tzfat, Jaffa, Tiberius and Gaza. Most of the inhabitants were Jews and the rest Christians. There were few Muslims, mostly nomad Bedouins. Nablus, known as Shchem, was exceptional, where approximately 120 people, members of the Muslim Natsha family and approximately 70 Shomronites, lived.

The interesting part was that Relandi mentioned the Muslims as nomad Bedouins who arrived in the area as construction and agriculture labor reinforcement, seasonal workers.

In Gaza for example, lived approximately 550 people, fifty percent Jews and the rest mostly Christians. The Jews grew and worked in their flourishing vineyards, olive tree orchards and wheat fields (remember Gush Katif?) and the Christians worked in commerce and transportation of produce and goods. Tiberius and Tzfat were mostly Jewish and except of mentioning fishermen fishing in Lake Kinneret — the Lake of Galilee — a traditional Tiberius occupation, there is no mention of their occupations. A town like Um el-Phahem was a village where ten families, approximately fifty people in total, all Christian, lived and there was also a small Maronite church in the village (The Shehadah family).

In Granada, Spain, for example, one can see Arabic heritage and architecture. In large cities such as Granada and the land of AndalucÃ­a, mountains and rivers like Guadalajara, one can see genuine Arabic cultural heritage: literature, monumental creations, engineering, medicine, etc. Seven hundred years of Arabic reign left in Spain an Arabic heritage that one cannot ignore, hide or camouflage. But here, in Israel there is nothing like that! Nada, as the Spanish say! No names of towns, no culture, no art, no history, and no evidence of Arabic rule; only huge robbery, pillaging and looting; stealing the Jews’ holiest place, robbing the Jews of their Promised Land. Lately, under the auspices of all kind of post modern Israelis — also hijacking and robbing us of our Jewish history.

[1] From http://www.answers.com: “Adrian Reland (1676-1718), Dutch Orientalist, was born at Ryp, studied at Utrecht and Leiden, and was professor of Oriental languages successively at Harderwijk (1699) and Utrecht (1701). His most important works were Palaestina ex monumentis veteribus illustrata (Utrecht, 1714), andAntiquitates sacrae veterum Hebraeorum.”

(CNSNews.com) – Five meters of ice– about 16 feet thick - is threatening the survival of polar bears in the Southern Beaufort...