Russia’s drills on the border with Ukraine do not contradict the Geneva agreements, the Russian delegation said in a statement on Monday during talks in Vienna on military security and arms control, Interfax reports. “The Geneva agreements do not stipulate restrictions on activities of the Russian armed forces within its national boundaries,” the document said. 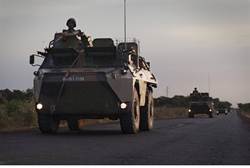 “The events being held in subdivisions and units of the Southern and Western Military Districts do not require, in regard to its scale, any explanations in accordance with the provisions of the Vienna document of 2011,” the statement said.

Moscow does not see grounds to hold visits to these exercise sites, the possibility of which is stipulated in the Vienna document of 2011. “The purposes, tasks and contents of these exercises were released by the Russian defense minister on April 24, 2014,” the Russian Foreign Ministry said.

Instances of possible indiscriminate and disproportionate use of force by the current Kiev authorities against protestors in southeast Ukraine should raise concerns among the OSCE (Organization for Security and Co-operation in Europe) member states, the Russian Foreign Ministry said.

“It is well known that a group of over 11,000 Ukrainian troops is operating in this area, armed with about 160 military tanks, over 230 armored fighting vehicles, at least 150 artillery systems and a large number of aircraft. This group significantly outnumbers local self-defense squads, and the presence of tanks, artillery (including multiple rocket launchers) and combat aviation suggests the possibility of indiscriminate and disproportionate use of forces, including the destruction of entire cities,” according to a statement by the Russian delegation at the Vienna talks on military security and arms control. The text of the statement was posted on the Russian Foreign Ministry’s website on Monday.

In Case You Missed It:  Get Ready for the Economic Collapse
Posted in Freedoms and tagged Eastern Europe, Military, Russia, Ukraine.

After years of rapid growth during the Obama administration, the cost of federal regulations is now bigger than the entire...