As with many federal accounts, the Highway Trust Fund is running on empty. Refilled with the 18.4-cent per gallon gas tax and disbursed by politicians and bureaucrats in Washington, the federal highway fund faces a $63 billion shortfall through 2018. Texas gets $2-3 billion per year from the fund which goes towards the roughly $7 billion in yearly Texas Department of Transportation expenditures. 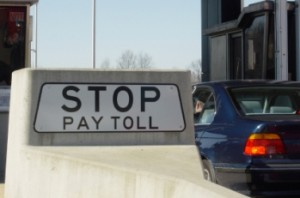 A shortage of funds tends to concentrate the mind—which is why the White House just proposed lifting an old federal restriction against tolling on 46,000 miles of interstate roads. This would allow states to collect tolls on federal interstates for the purpose of funding repairs and expansion.

Organized labor loves the idea as they expect to get the added work at inflated prevailing wages mandated by federal law.

Folks who own the companies that pour concrete love the idea, as they expect to get the new contracts, coupled with reforms to streamline environmental permitting

There’s even something for the progressive-environmentalist crowd. Buried within the White House’s proposal are provisions to double funding for inner city mass transit to $22 billion while increasing potential fines on automakers by nine-fold to $300 million.

What commuters and taxpayers may think of adding tolls on top of taxes is another story however—one that takes a back seat to the powerful interests now speaking to our representatives in Washington.

Of course, we’ve seen this rodeo before: government gets bigger, borrows and spends more tax money, and then, when funds get squeezed, politicians seek ways to increase taxes, fees, or tolls for things large numbers of voters actually use or want, such as safe streets or free-flowing roads. Meanwhile, general revenue that once paid for critical items gets shifted to growing the welfare state and swelling bureaucratic power.

When the current federal highway bill expires on September 30, Congress should consider the White House’s proposal to allow states to charge tolls on interstates. But, Congress should go further by returning transportation funding and policy back to the states where it belongs.

With states in control of their own transportation destiny, local priorities and sensibilities could more readily be met than is now the case where substantial swaths of transportation policy are determined by federal statute or regulation.

For instance, if a state wished to continue federal excise taxes on gasoline and diesel as state taxes, it could. Alternatively, a state might reduce fuel taxes and institute tolls instead. The latter serving not only as a source of revenue, but also as a demand pricing tool, akin to matinee pricing at a theater, designed to encourage drivers to use interstates during off-peak hours.

Of course, some states might simply decide to take the federal gas tax money and plow it into light or high speed rail, buses, or even Medicaid or education. The point is: decisions about how to spend tax money on transportation are best made at a state level, not in Washington, D.C.

Former U.S. Senator Kay Bailey Hutchison once proposed a bill to allow states to withdraw entirely from the Federal Highway Trust fund, and thus keep federal fuel taxes in any state that so chose. This bill was in response to the inherent inequities of a centralized program that collected the gas tax money, skimmed some off the top for bureaucracy and rules writing, and then doled it out, often with politics in mind. Since 1959, Texas has seen about 81 cents for every dollar of federal fuel excise taxes collected. Alaska gets $4 back for every dollar put in. The D.C. Beltway region gets more than half of its transportation funding from the federal government; Texas, around 44 percent in recent years.

Due to increased federal borrowing and general revenue support to the federal Highway Trust Fund, Texas has seen more money come from Washington, but the additional largess was borrowed money—money that is soon to dry up.

In Case You Missed It:  Globalists following planetary script to REPLACE HUMANS with AI systems … you are now obsolete
Posted in Tyranny and tagged Freedom, Obamanomics, Taxation, White House.

Donald Sterling and The End of Free Speech USA

By Klaus Rohrich:   Let’s say this right at the outset: Donald Sterling, current owner of the Los Angeles Clippers basketball...