by COLIN FLAHERTY      This week near Dover, Delaware, a viral video appears to show another instance of black-on-white violence among high school students. 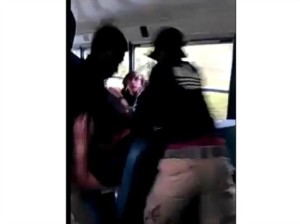 The shaky cell phone video shows a group of black teenage boys punching, knocking down, and kicking a white teenage boy, leaving him dazed and confused on the school bus floor.

The victim of the attack had been riding home from Parkway Academy School near Dover when the assault reportedly began. The video shows him sitting alone, facing front, when the attack begins from the rear – and continues from the side and the front of the school bus. “I didn’t do nothing,” he protests.

The student’s uncle found out about the incident and spread the word on Facebook.

“This is a video of my nephew Alec being beaten by a group of teens on his bus ride home from school yesterday,” wrote Jonathan Guessford. “He was able to get off the bus at the next stop, 14 miles from his home. He went to the Magnolia Fire Hall and called the police.

“The bus driver failed to intervene AT ALL,” Guessford continued. “She didn’t stop the bus while the beating occurred. She didn’t call the police and file a report. She didn’t inform the administration that the beating occurred. Apparently, the bus driver called the school and stated that Alec left the bus early for no reason, according to the administrator that called my brother yesterday.”

The attack is part of a pattern of racial violence I have documented in White Girl Bleed a Lot: The Return of Racial Violence to America and How the Media Ignore It.

In Case You Missed It:  Biden Blasts Americans on Eve of 9/11: ‘We Have Witnessed Violence in America Against Muslims – True Followers of a Peaceful Religion’ (VIDEO)
Posted in Tyranny and tagged Crime, hate crime, Racism, United Socialist States of America.

Democrats have their doubts about this whole First Amendment thing

If you thought the Democrat Party couldn't sink any lower, check out their latest power grab, from the Boston Herald:...