Another Mexican military incursion into the United States occurred near San Diego this month and the Obama administration is trying to cover it up, though officials at one Homeland Security agency have come forward with the startling details. 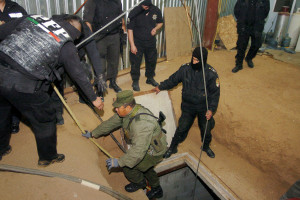 The infiltration took place a few weeks ago at a cross-border drug tunnel recently discovered by federal authorities. The U.S. Border Patrol was charged with guarding the tunnel, which runs under the U.S.-Mexico border and leads to a warehouse in Otay Mesa. A group of at least five armed Mexican military soldiers came through the tunnel on April 1 and attempted to enter California through the warehouse, according to an account posted on the Border Patrol’s local union website.

The Mexican soldiers are clearly seen on a tunnel camera carrying military assault rifles, according to Border Patrol Union official Gabe Pacheco, who is also cited in a San Diego-area news story of the incident. The chief of the San Diego Border Patrol sector, Paul Beeson, also confirms in a local news report that the armed men in the tunnel are in fact members of the Mexico’s armed forces, known as SEDENA or Secretaria de la Defensa Nacional.

The local media outlet seemed to press Beeson to acknowledge that an incursion took place, but he downplayed the event. “We are confident they were Mexican government officials who had reason to be in the tunnel,” Beeson says. He acknowledged, however, that “it’s unfortunate that they didn’t tell us when they were going to be there.” The Border Patrol sector chief proceeded to admit that the violation “triggered a heightened law-enforcement response and appropriately so.”

The official version from the blanket agency charged with protecting the border, the Department of Homeland Security (DHS) is that the incursion never happened. In fact, a special agent with Immigration and Customs Enforcement (ICE), Joe Garcia, contradicts the Border Patrol report in the news story. “It’s illegal and they would be arrested,” the ICE official said, apparently referring to Mexican military soldiers crossing in the U.S. without permission.

Who to believe? Here are some facts that might help some decide. Mexican military incursions happen all the time and the U.S. government covers them up or tries to justify them when they become public. In fact, earlier this year a serious incursion occurred in Arizona. Two heavily armed camouflaged soldiers from Mexico actually crossed 50 yards inside Arizona and held American Border Patrol agents at gunpoint in a tense confrontation.

The Mexican soldiers retreated back south after a 35-minute standoff as if nothing ever happened and the Obama administration just let it slide. The unbelievable foray was made public by a mainstream newspaper that obtained government documents this month with disturbing details of the January 26 incident. Specifically, the paper cites the Border Patrol Foreign Military Incursion report and a separate letter from U.S. Customs and Border Protection Commissioner R. Gil Kerlikowske, an Obama appointee who was recently sworn in.

Kerlikowske admits that the intruders were “confirmed members of the Mexican military” but he asserts that U.S. border officials determined that no further action was necessary involving the matter. Like a loyal Obama lapdog Kerlikowske claims military incursions from Mexico are infrequent though he was apparently forced to admit that there were 23 incidents in the Tucson and Yuma sectors of Arizona since 2010, including three this fiscal year alone.

Judicial Watch has done a lot of work in this area and has obtained DHS records that show Mexican military incursions occur quite often and go unpunished by the U.S. For instance, the DHS documents reveal 226 incursions by Mexican government personnel into the U.S. occurred between 1996 and 2005. In 2007 alone, 25 incursions occurred along the U.S.-Mexico border involving Mexican military and/or law enforcement. The problem has only gotten worse over the years, according to the records obtained in the course of JW’s ongoing investigation. This week JW initiated public-records requests related to this latest tunnel incursion in Otay Mesa.

A few years ago police in Phoenix Arizona reported that three members of Mexico’s army conducted a violent home invasion and assassination operation that killed one person and littered a neighborhood with gunfire. The Mexican military officers were hired by one of that country’s renowned drug cartels to carry out the deadly operation, according to Phoenix police officials, who confirmed the soldiers were armed with AR-15 assault rifles and dressed in military tactical gear. An official police memorandum describes it as a “drug rip,” a tactical assault in which approximately 100 rounds were fired.

President Obama walks with then-Secretary of State Hillary Clinton. (Photo: Pete Souza) Americans will get the answers they deserve to...