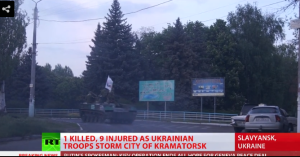 Ukraine’s Western-backed coup regime in Kiev has launched an offensive against ethnic Russians in the east while a pro-regime mob used fire to kill some 31 anti-regime protesters in Odessa. Virtually all U.S. pundits favor the coup regime, but Daniel Patrick Welch offers a different view of the conflict

As the fog of war descends on Ukraine, it is important to shout a few main points from the rooftops before they get lost in the details. A coup-appointed junta in Kiev, designed, engineered and controlled from Washington, has begun a massive armed assault on its citizens in the east.

This war crime is no longer in doubt. Nor can there be any more doubt about who is pulling the strings. The illegitimate junta has done what its International Monetary Fund masters demanded it do just the other day. Pointedly – and tellingly – the Washington-based IMF, the mafia enforcer of western capital, issued a statement saying that the crushing austerity agreement — already a death sentence for many Ukrainians living at subsistence levels — might have to be “revised” if the chosen cabal in Kiev could not control the rebellious and resource-rich eastern regions, the grand prize in the whole “democracy” charade.

The junta, using a rump military and fascist shock troops, has dutifully complied, a shameful and disgusting moment in world history. It is also, however, a moment that I think will be transformative in ways we can’t even yet understand.

For a moment, I was afraid that in a fully militarized phase the resistance would be less able to access its chief asset — the people. When war breaks out, soldiers are not forced to confront the humanity of their opponents, and we would no longer see scenes like cordons of ordinary people trying to stop tanks with their bare hands. I was wrong again, I fully admit. The struggle, like life, teaches me something new every day. The people’s resilience is love itself, and I am in awe of their courage; I wake up every morning glad to be alive because I’m glad they are still alive.

And a giant middle finger to the “peace” community in the West, these apologists of the war machine, and especially liberals and elements of the First-World Left who are always the last to see that their purist intellectual detachment is always — always — suspiciously close to empire’s agenda, who watch (and cheerlead!) while the U.S. and its proxies slaughter innocents and thwart the will of the people from Afghanistan to Zaporizhia, a city in southeastern Ukraine.

The United Nations has exposed itself as an eager and unabashed tool of western supremacy and apologist for the crimes of empire. It will be discarded along with the other detritus of the old world as UNjust,  UNequal and UNwilling to break the yoke of the western paradigm. I think the organization is much worse than useless.

I actually think this conflict in Ukraine is the death knell for the UN, along with the IMF/EU/NATO and all the other western organizations which act in concert to try to force billions of people to believe that 2 + 2 = 5. They are the problem, and they have no solutions. As it should be — for as Eduardo Galleano gently reminded us, “it would be strange if the remedy should come from the United States, the same place which brings us the disease.”

Amid the lies and distortions of a bought-and-sold press and a government propaganda machine, we can still cut through the bullshit and see the hustlers for what they are: pitchmen of a war machine hell bent on selling us more death and destruction. We all have it within us to refuse the pitch.

Each of us has the ability to grasp a Michael Corleone moment, in that scene from “The Godfather” in Havana in 1959, when he knew instinctively that he was right and Hyman Roth was wrong. Though no fan of the revolution, he saw that it was a bad investment when Castro’s revolutionaries would rather kill themselves than be captured.

The current crisis presents many such opportunities, not the least of which are those stories and images of people stopping tanks with their own bodies. One moment of particular clarity for me came in an absolutely stunning interview by Graham Phillips of a man on the street in Kramatorsk, who condensed what it’s all about for the people of East Ukraine in two and a half minutes. Eloquent, impassioned and clear, it still brings a lump to my throat.

“Furthermore, the Banderites who have now come here and want to impose their ideology on us have given us a precious gift because they have awakened for us in East Ukraine our patriotism, which had been dormant for many years.” (“Banderites” is a name for the neo-Nazi militants who spearheaded the Feb. 22 coup which ousted Ukraine’s elected President Viktor Yanukovych. They are proud followers of Stepan Bandera, who led Ukrainian forces in World War II that collaborated with the Nazis in the extermination of Jews and Poles in pursuit of a racially pure Ukraine. The Banderites are contemptuous of the ethnic Russians of eastern Ukraine whom they considered inferior, if not sub-human.)

“So thank you to all the Banderites who have come into Kiev, and who have made people remember who they are, who they are in the world, and above all why they are here on this earth.”

Filter this in among the ludicrous and increasingly obvious slanders about “pro-Russian separatists,” “pro-Russian Russians” and other ill-fitting and deliberately vilifying terms to synch up with the ginned-up Russophobia now polluting virtually all western airwaves. One might consider the similarly bizarre yet more honest term “pro-self selves,” or “pro-self humans.” Or simply, “People who object to being killed.”

As the helicopters and missiles start flying, you can feel the desperation of a people under attack, as in this more pointed “Letter from East Ukraine,” from those whose grandparents fought and died to defeat fascism:

“Each Banderite scum, each rat of the National Guard and other gangs must know this: you came to our land with weapons! You’ve come to kill us in our land! So don’t expect any mercy from us! You will find only grim death! Because you have not yet tasted Slavic-Russian anger! But it will overwhelm you in a severe, violent flame! Do you think we are afraid? We, Russians in the South-East afraid? You are very, very deeply mistaken. And not many of you will be able to understand, as few of you will get to return from the South-East.

“So ask your parents, wives, sisters, from the heart to prepare coffins for their husbands, sons and brothers. Or at least a place in the cemetery, as most of the bodies may be hard to find.

“We have nowhere to retreat and we are Russians, though for a while yet with Ukrainian passports. We are Russians, who never give up! We will defend ourselves to the last bullet, the last grenade, to our last breath! And if we die, we die for the glory of the Russian land! We will never be under the Banderite fascist scum!

“Brothers, Slavs, Russians, if we perish, avenge us. Death to fascism!”

Even more astonishing, beyond geography and cultural ties, an experiment in western Ukraine is quite eye-opening. Ukrainian TV in the central-western town of Zhytomir sent Maidan activists posing as armed southeastern rebels (opposed to the Kiev regime) to the town center of Zhytomir asking for directions. The pretend rebels were apparently quite surprised that local residents willingly helped them, even giving details on how to avoid police checkpoints. Then, armed, they stood for a time by the local police station, and no one paid them any attention.

In other words, the mask is off, and the junta is done. Massive, suppressive violence is the only way for the western puppet junta to maintain power. They will kill a good number of people, but their deaths will be avenged, and the world will be transformed. It is an amazing moment.

I often dig into my repertoire of Irish Republican songs, a wellspring of sentiment that defines moments like these, encapsulating the often vulgar determination of a people with their backs to the wall:

Go on home, British soldiers, go on home
Have you got no fucking homes of your own?
For eight hundred years we have fought you without fear
And we’ll fight you for eight hundred more

A new world is arising right before our eyes, and those who still don’t see it will be consigned to the dustbin of history. Are you ready? Do you hear the people sing? The heroic people of southeast Ukraine are taking a stand for us all, on behalf of the peoples of the world and against the sick and sorry world the Washington consensus wants to sell us.

It is developing and unfolding now, and we can’t quite predict its course. We do, however, have the power to choose whether we want to be on the right side of history. In the words of the old gospel spiritual:

Daniel Patrick Welch is a political analyst, writer, linguist and activist. Daniel Patrick Welch lives and writes in Salem, Massachusetts, with his wife. Together they run The Greenhouse School (http://www.greenhouseschool.org). A version of this article first appeared at http://danielpwelch.com .